After getting off the plane it finally dawned on me that I hadn’t a clue
how to get to the hotel.  Being that I’d obviously flown in and wasn’t
driving I was going to catch a bus of some description toward the Waldorf Astoria Edinburgh – The Caledonian.  After asking some of the friendly locals I found out there was
a airport bus that ran 24 hour and stopped across the road from where I
needed to be, and unlike a taxi which would of been around £20 this
only cost £7 return. 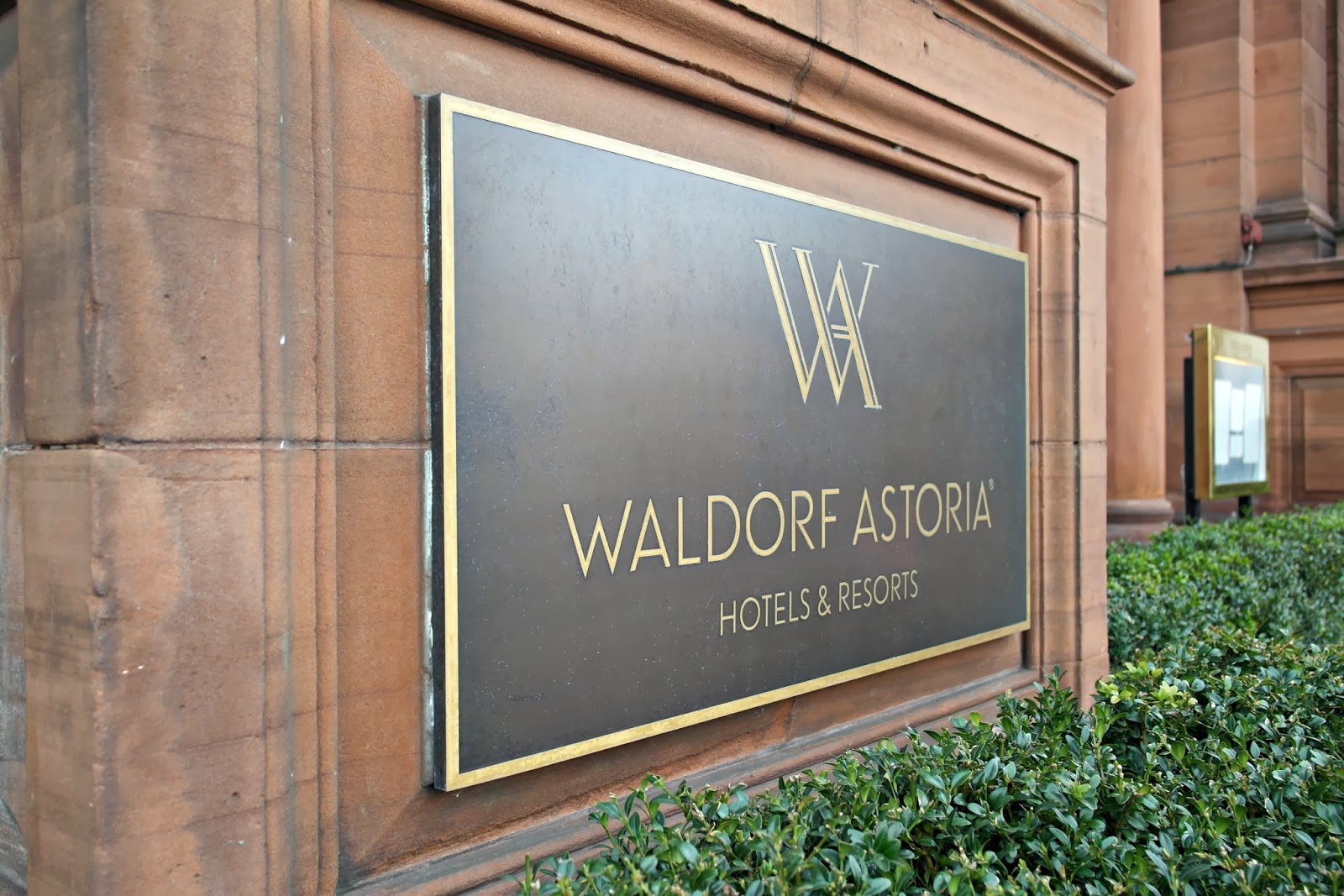 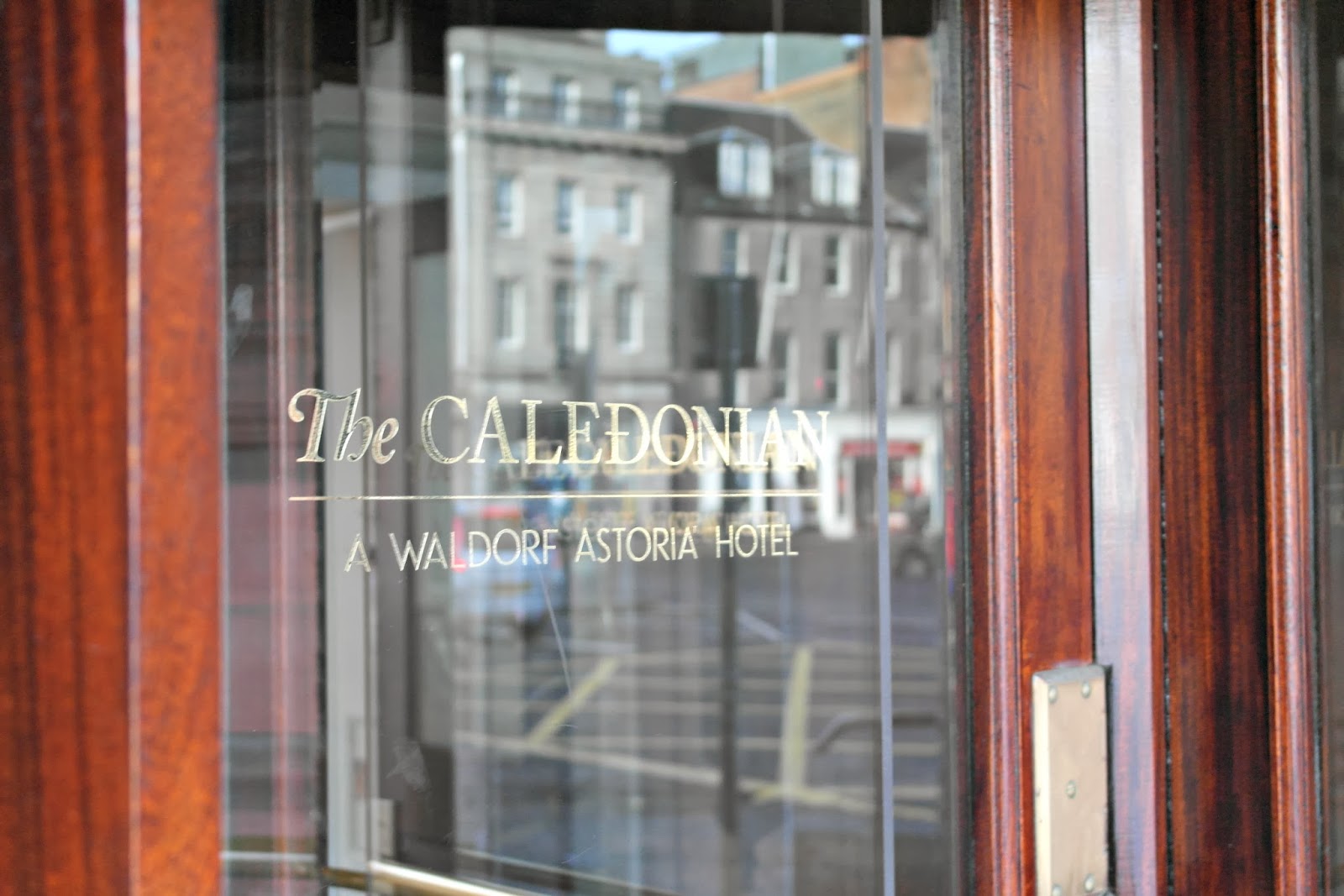 I got off the bus and immediately saw where I’d be staying and looked
up… The building of the Waldorf Astoria Edinburgh was magnificent and very grand.  With the Edinburgh castle and Princes Street close by it is clear to see why this is a popular venue to stay at. 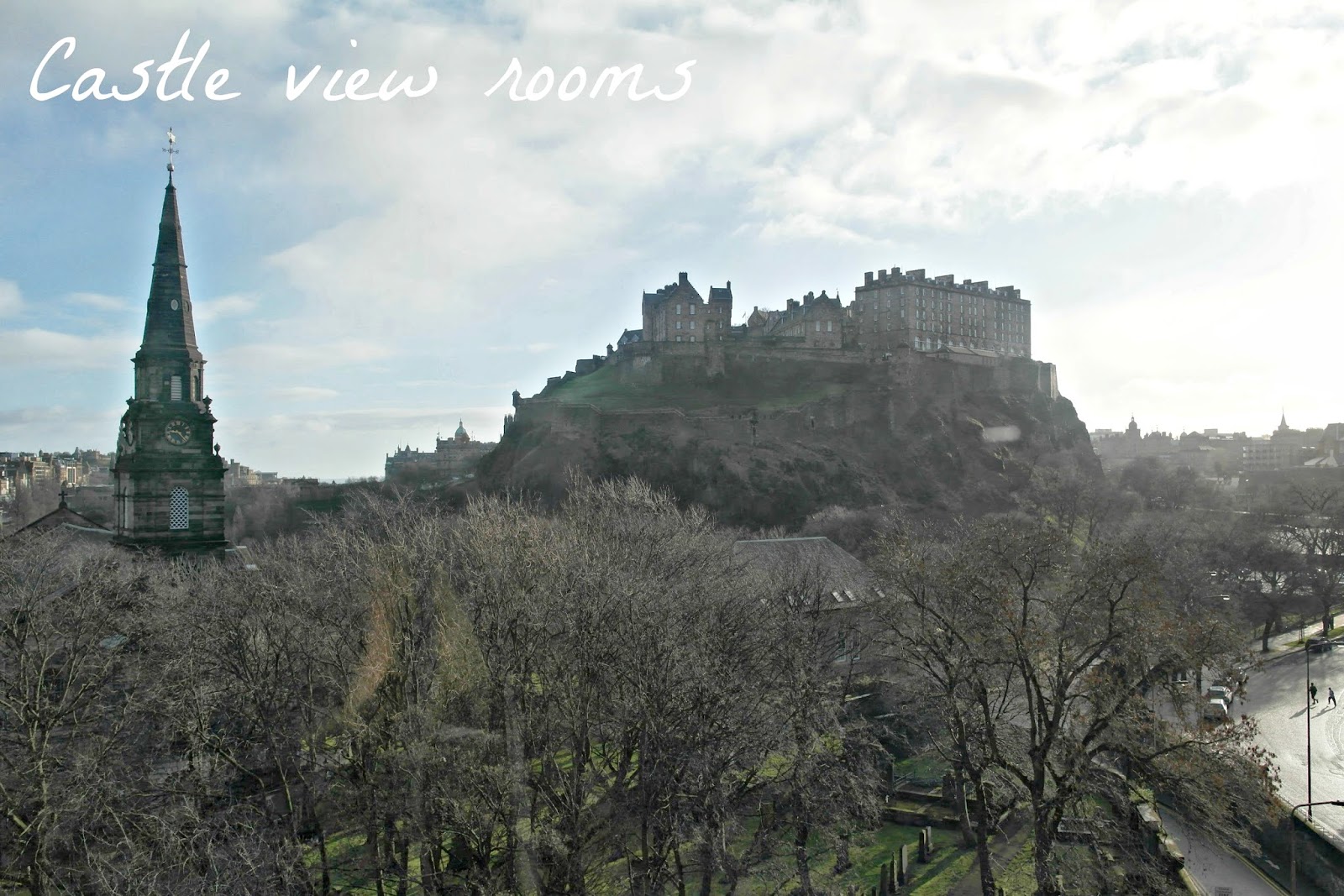 Having been a mystery shopper and previously visited a lot of hotels for work I can honestly say visually this is a beautifully elegant period building.  Unlike other hotels this one shows character and hints that it could tell a historical tale. 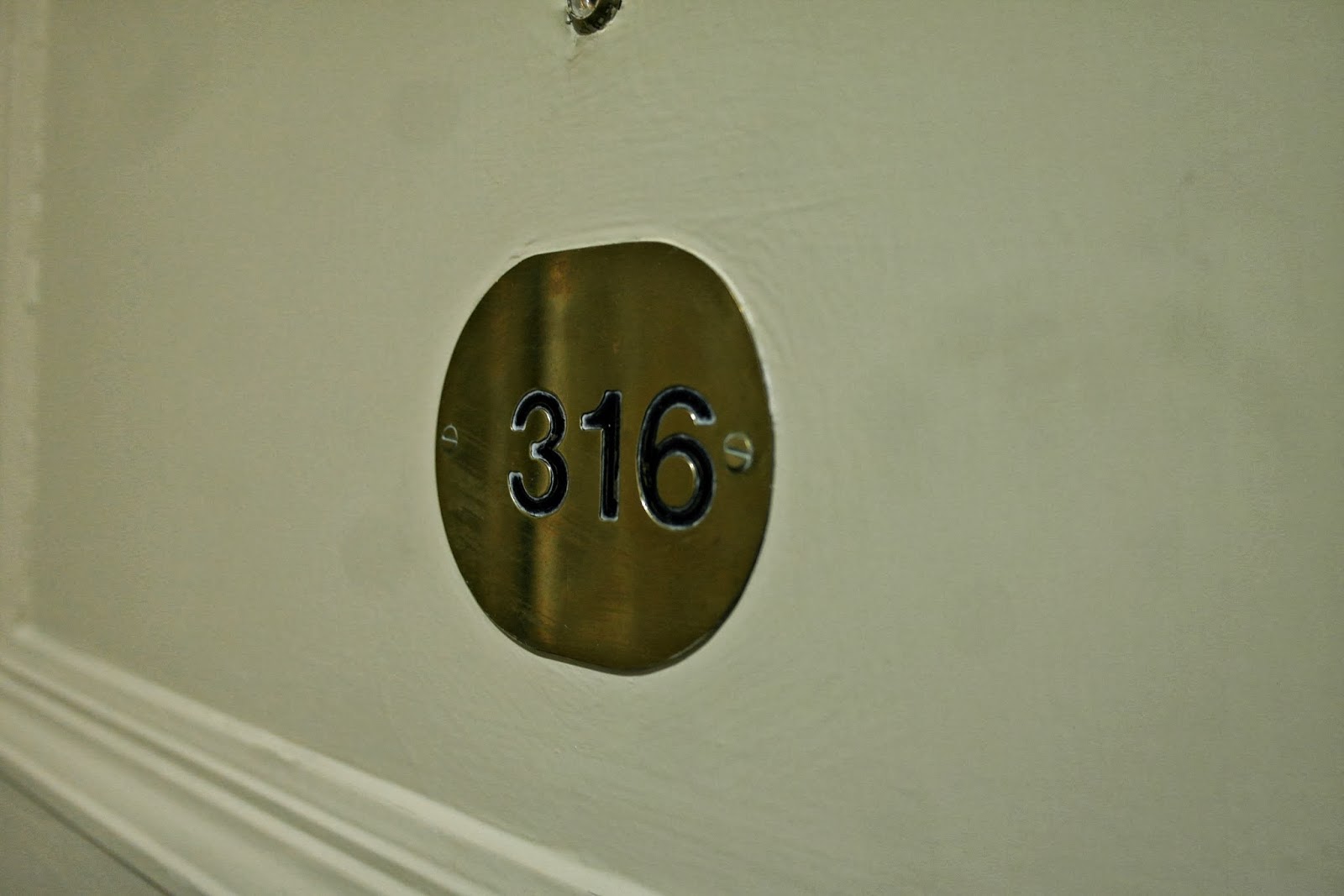 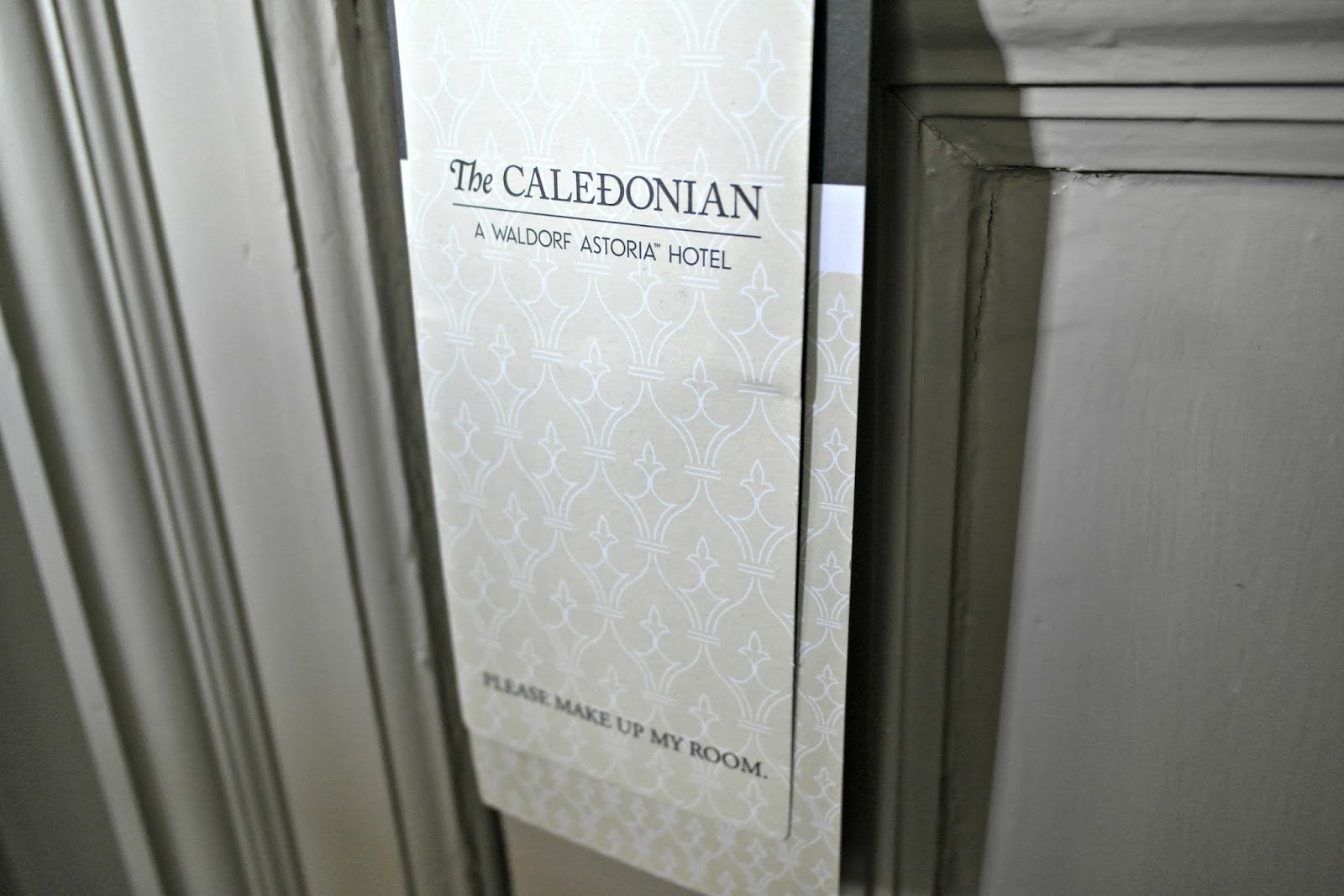 On arrival there were doormen dressed in dapper attire complete with top hats and tartan trousers, both gave a happy greeting and escorted me in. Regardless of my travelling clothes (trainers and jeans) they were ever so friendly and asked if they could assist me with my luggage.

Going into the main part of the hotel you could see how grand it was from its high ceilings.  One thing I would like to point out is that it is current with its interior, but keeps all elements of tradition which of course creates a wonderful ambience that was truly inviting. 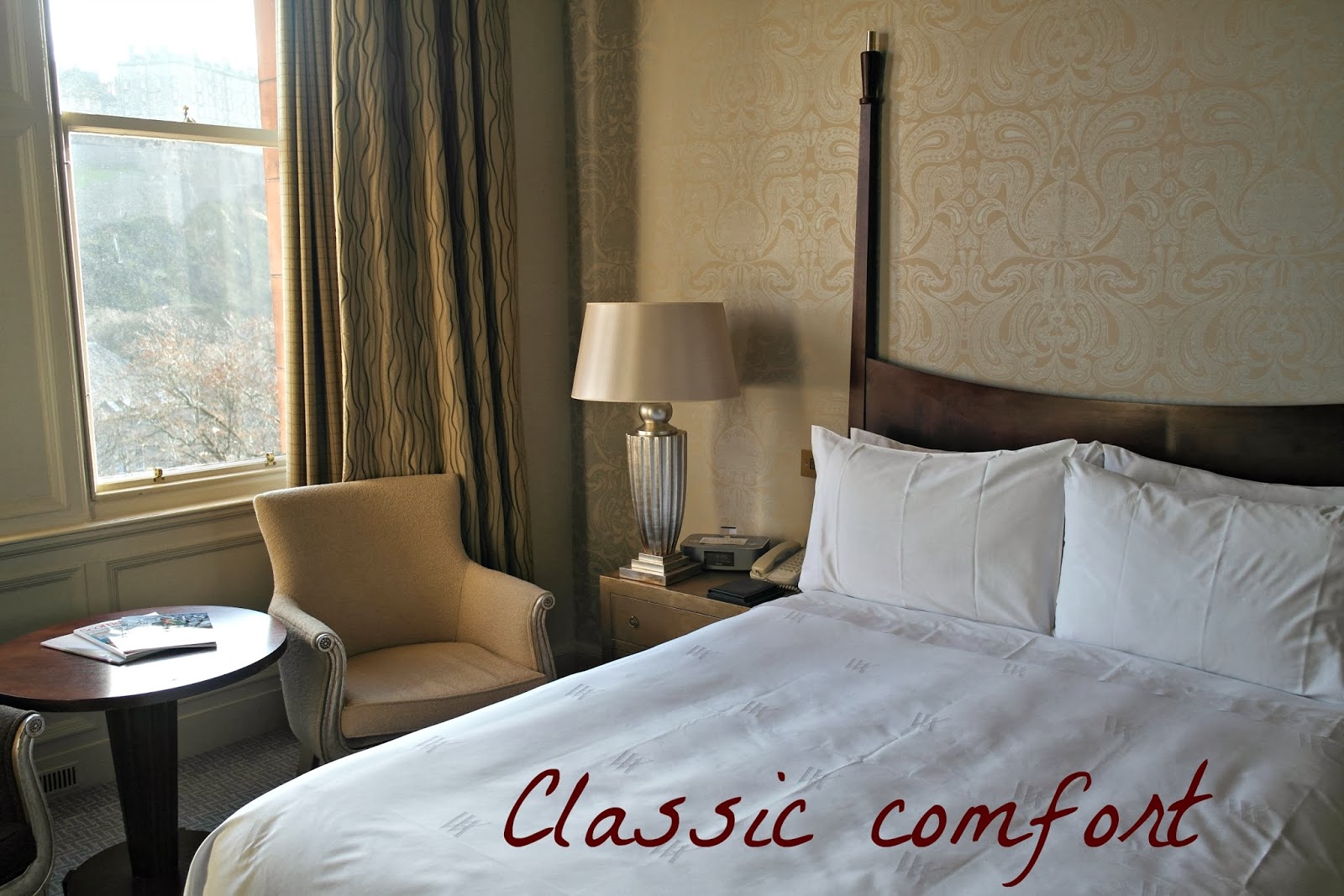 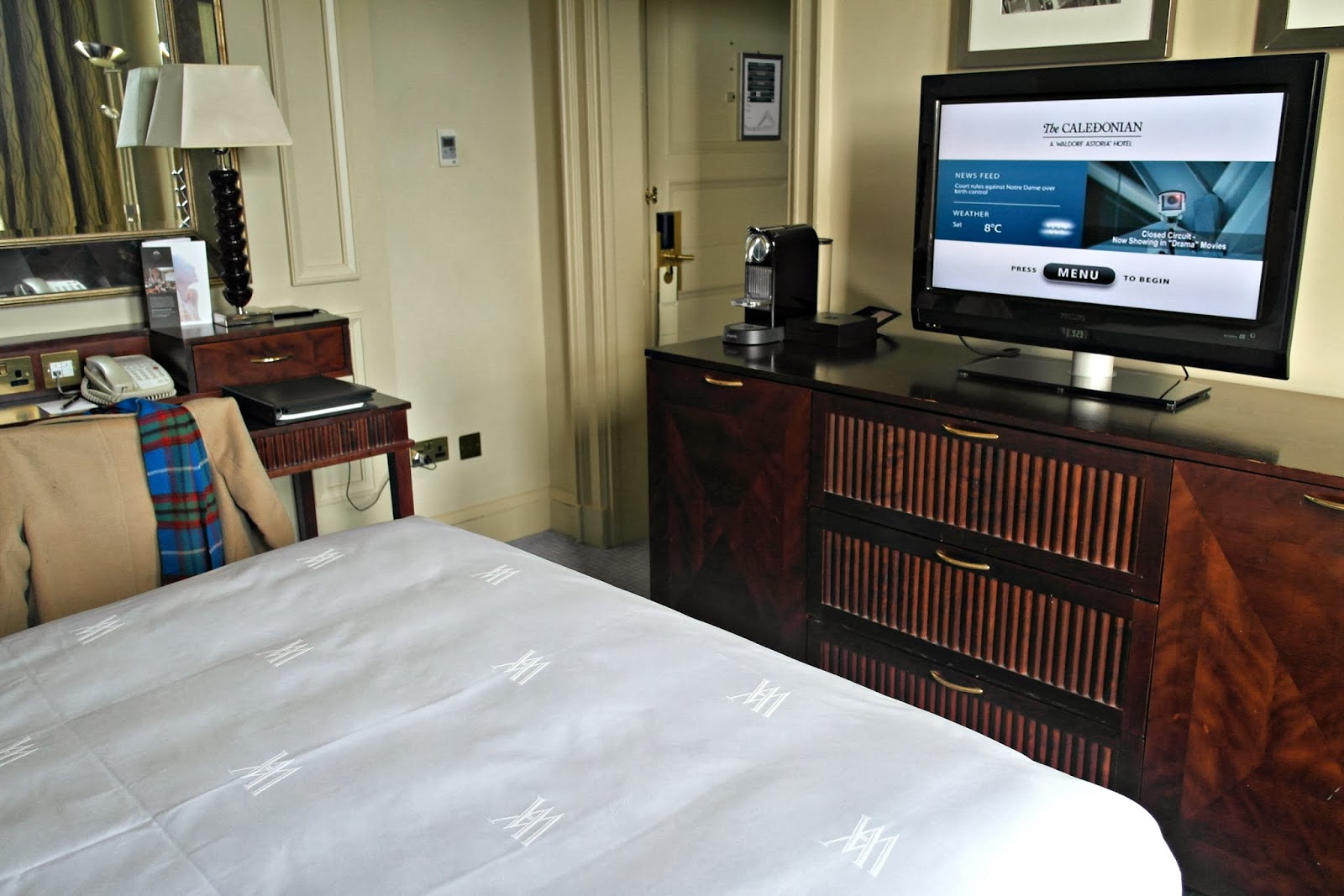 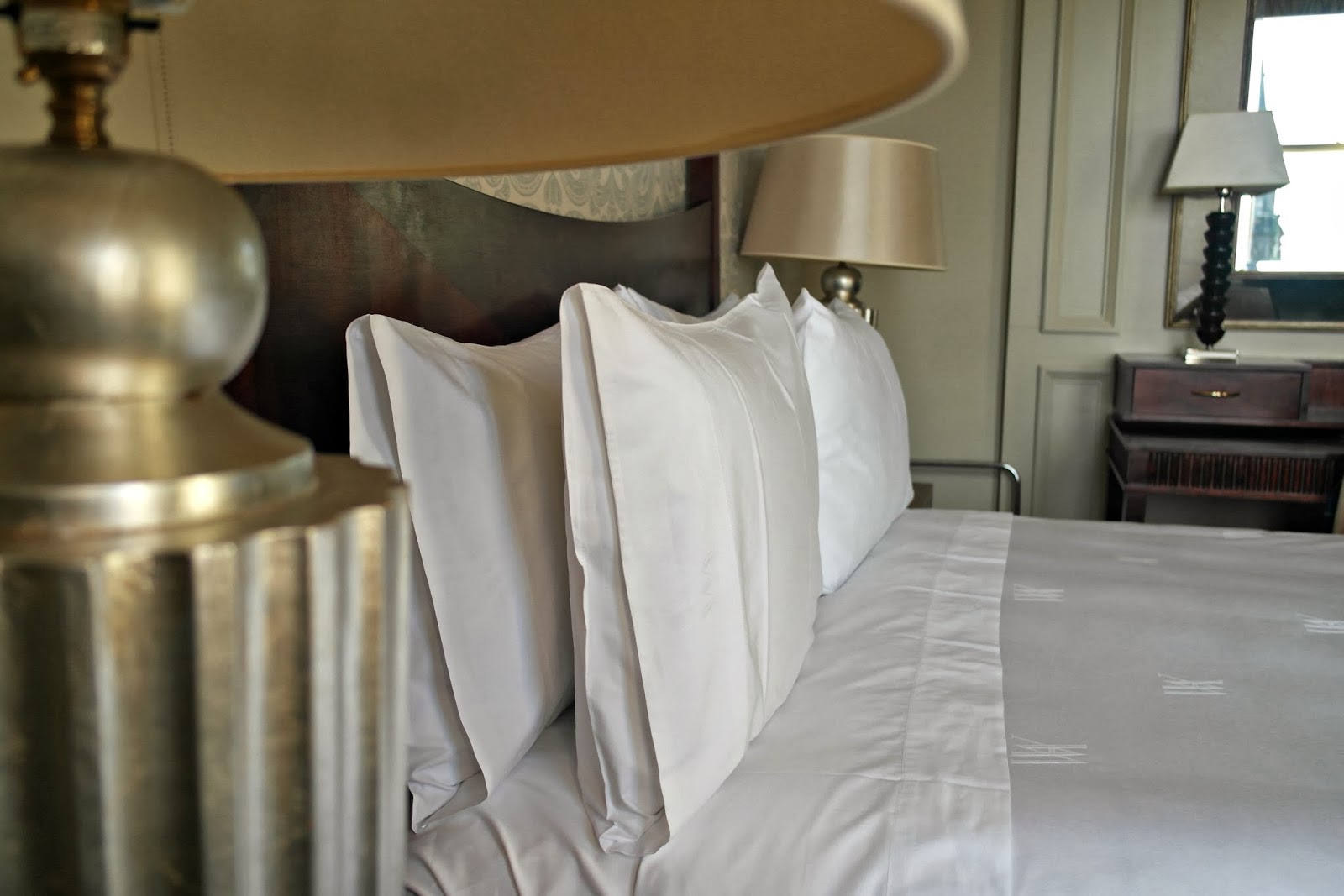 I was staying in one of the hotel castle view bedrooms which I must admit was quite epic, and when I entered the room I was stunned by the view.  The hotel have kept their original windows which obviously are in keeping with the tasteful look, but they are very large so you literally can see all of Edinburgh Castle and the city centre.

There was a kettle complete with Walkers Shortbread, teas, coffees and a stand alone coffee pod machine which produced barista style coffee in the comfort of the hotel room.  There were other items which you’d naturally assume to be in the room such as a wardrobe, iron and ironing board, hairdryer, television, mini bar etc.  One thing I would of like to see would of been a full length mirror, there was a extra large mirror over the dressing table but when heading out it’s always nice to check your ensemble before leaving the room – luckily inside the lift is mirrored so you can do a quick check on your way down! 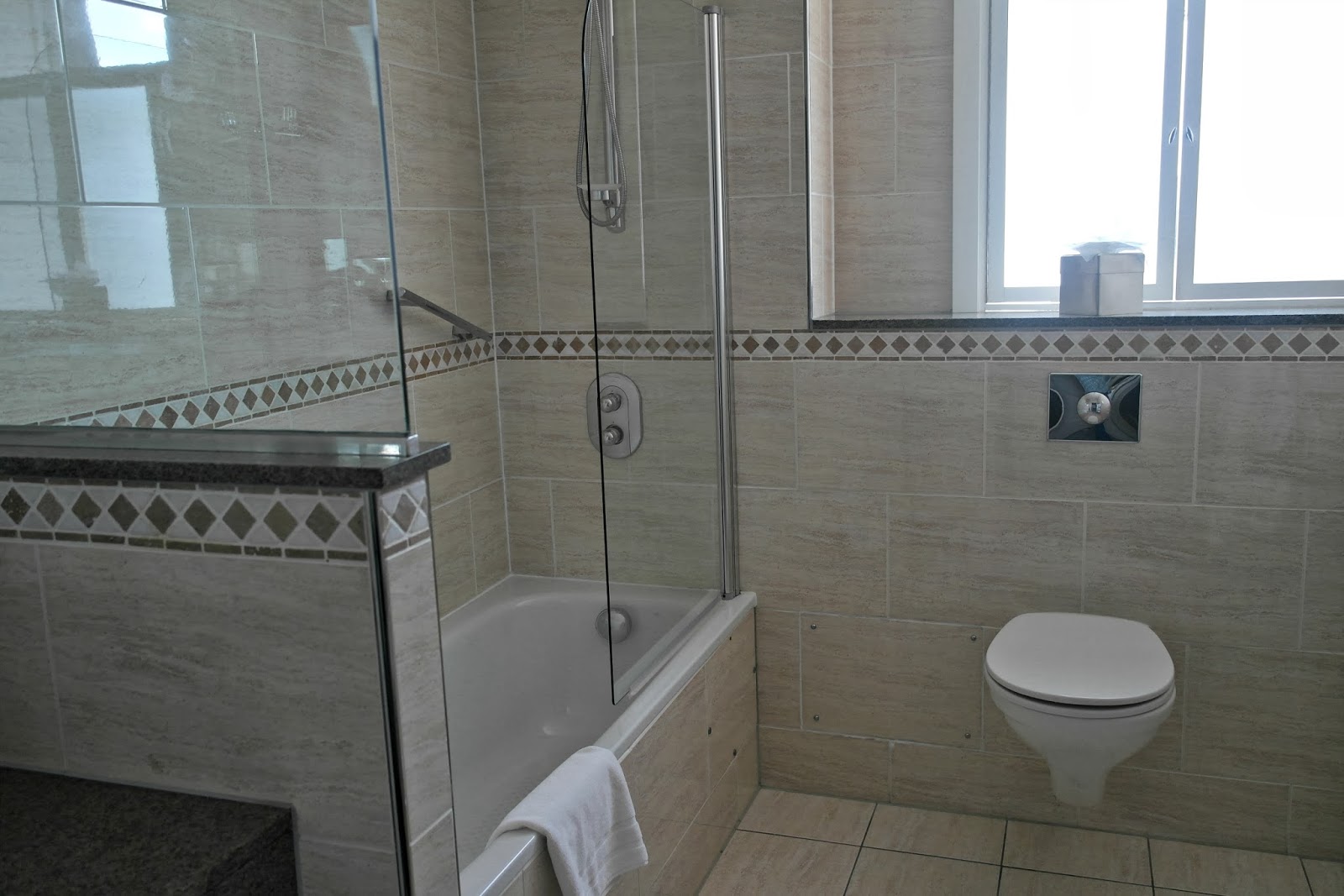 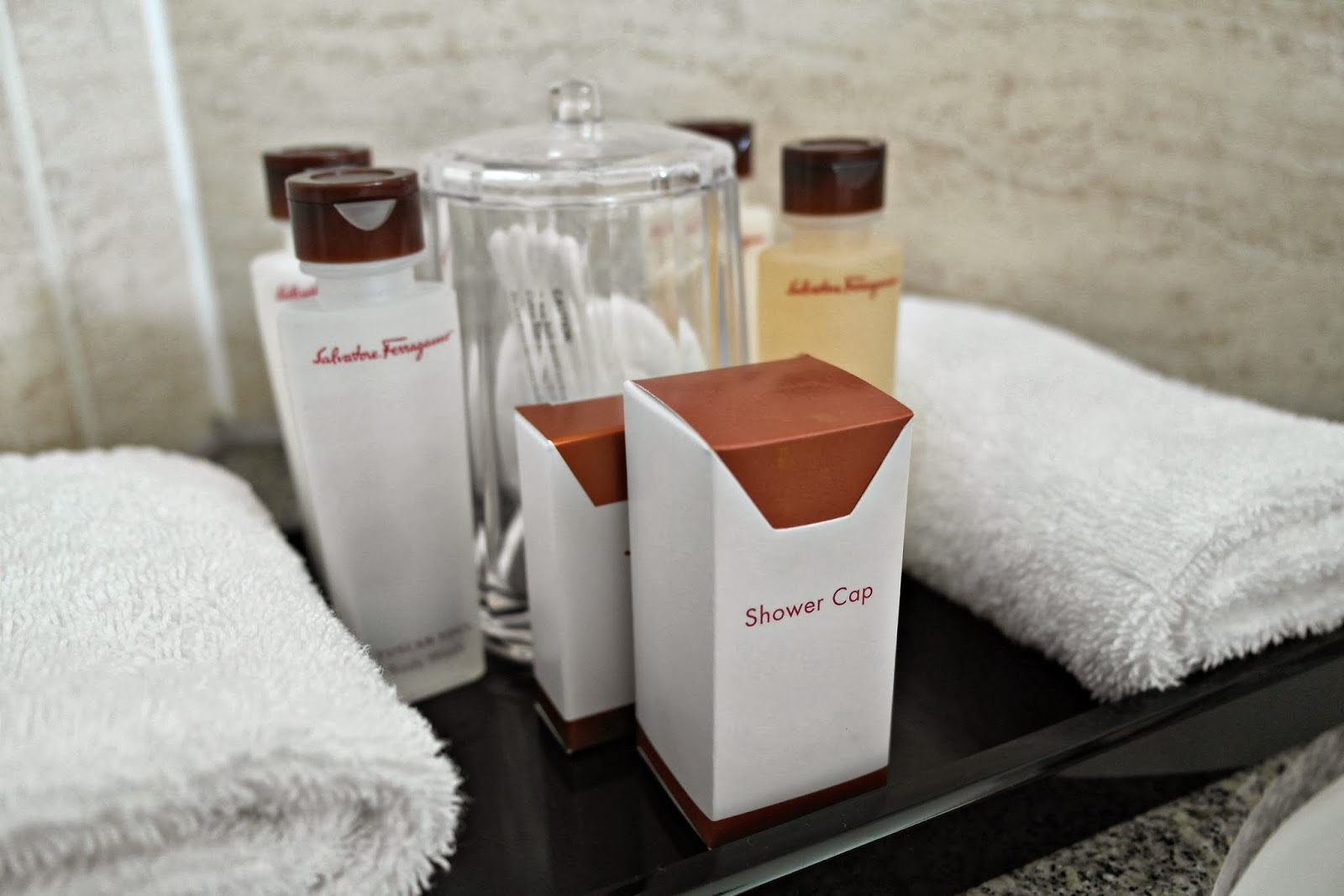 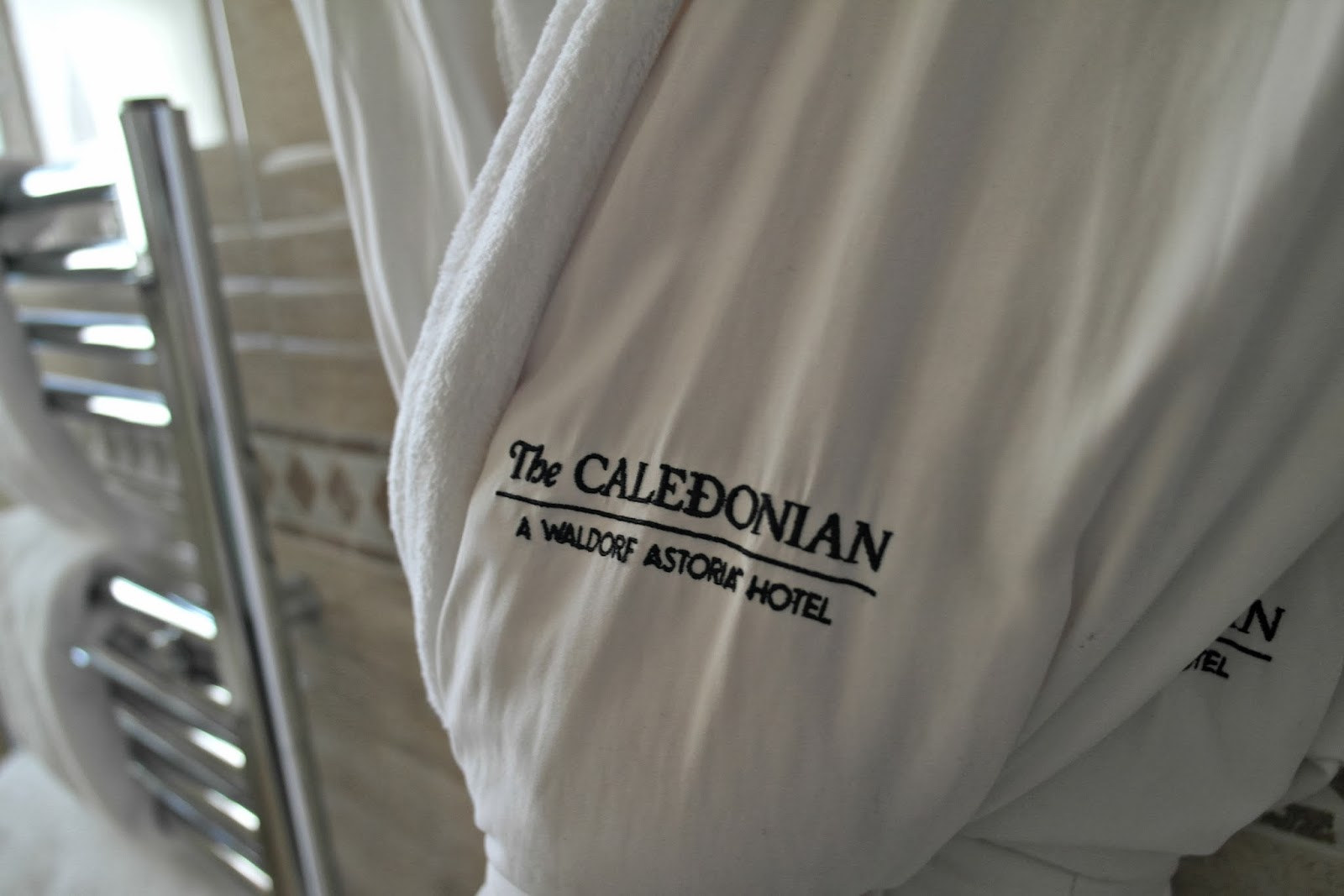 The room was the perfect balance between spacious and cosy, especially with such a comfortable bed and a choice of pillows to suit you.  I was slightly concerned the high ceilings may make the room feel lacking in character and cold, but it was honestly the absolute opposite.

Opening the bathroom door I was a bit stunned how large it was in there, with good sized bath, big mirror over the sink, a heated towel rail and hotel branded luxurious dressing gowns all made it very A-list.  It was very impressive, as usually the bathroom is the place to suffer in size. 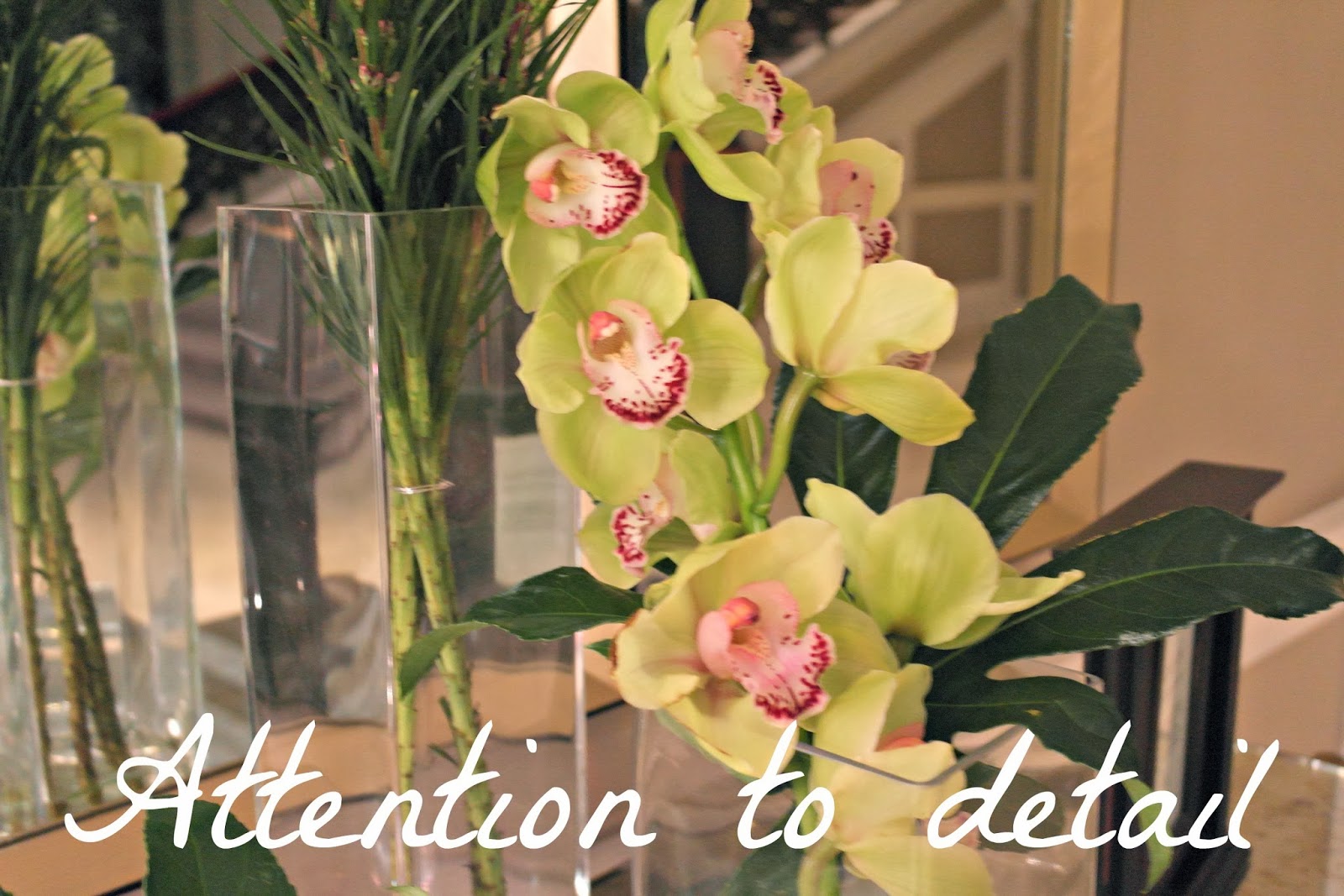 I decided after walking back from a day of shopping to indulge in going for a swim.  The hotel actually have a spa on site called Guerlian, which boast a wonderful range of treatments that guests can book in for.  Prices are premium but so is the quality of treatment, and includes a pool, jaquzzi, sauna, steam room and gym for guests to use free of charge. 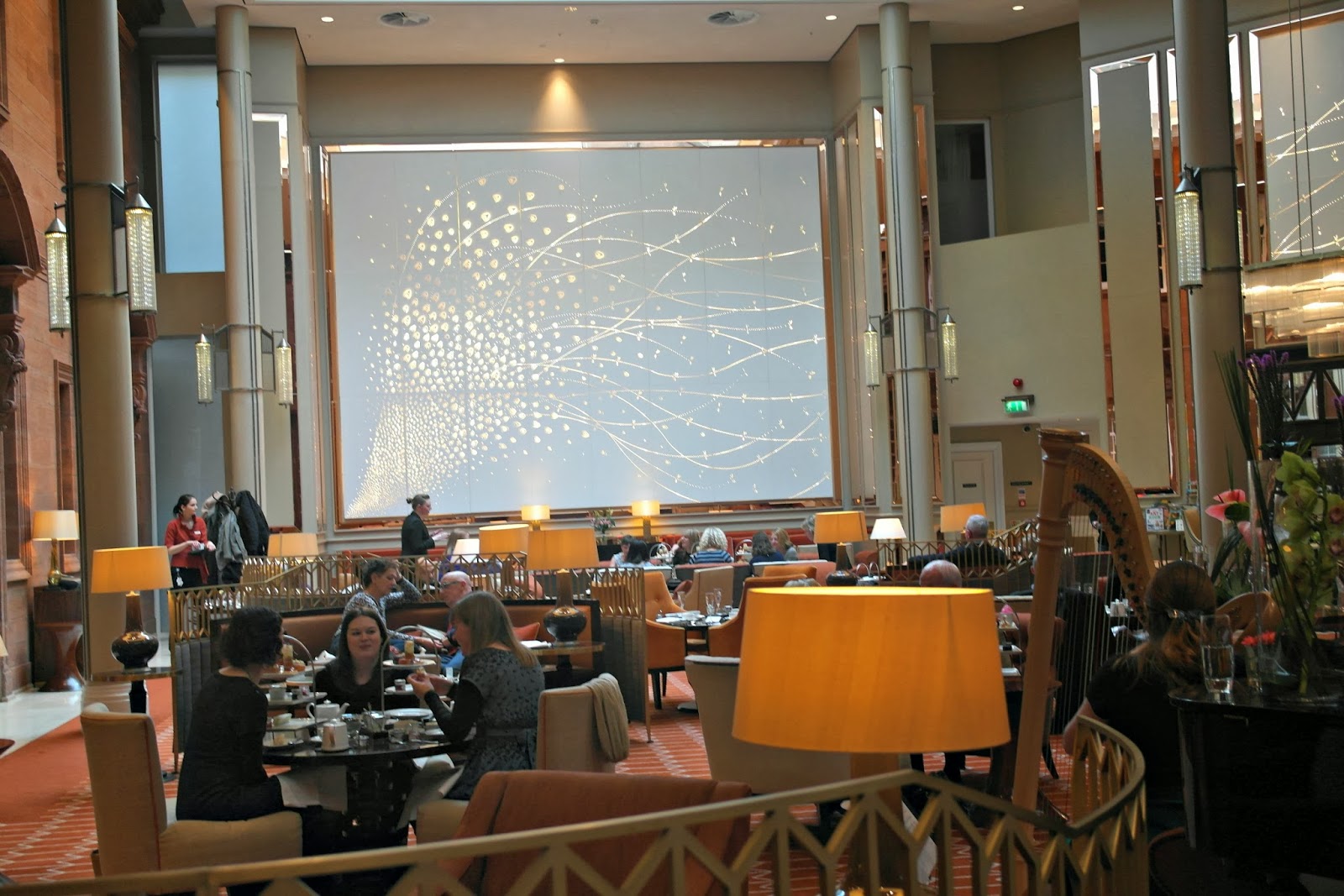 There is a beautiful communial area called Peacock Alley, which you can sit and enjoy downstairs in the hotel.  Here you will be able to access the free wifi as in the rooms it is chargeable. 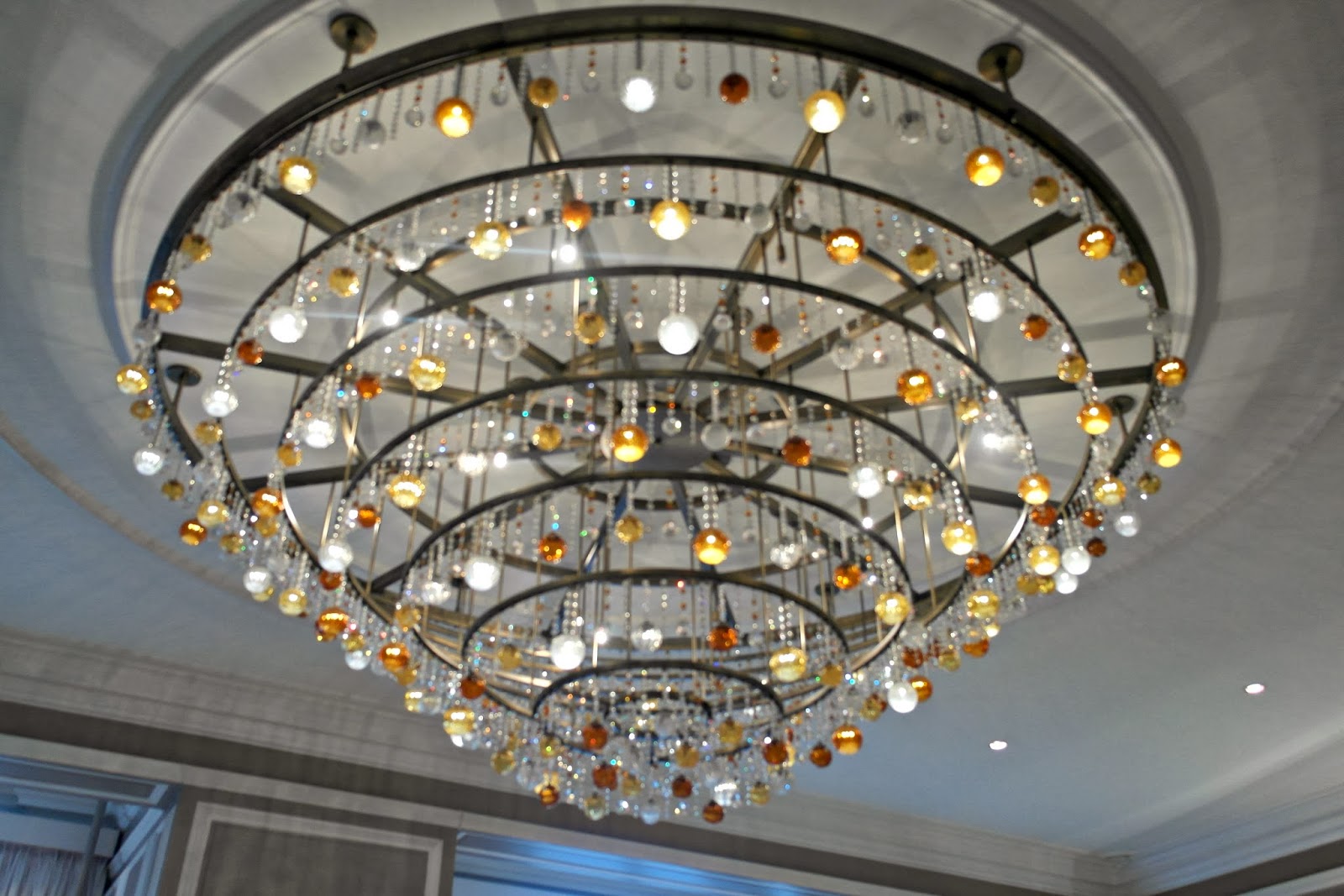 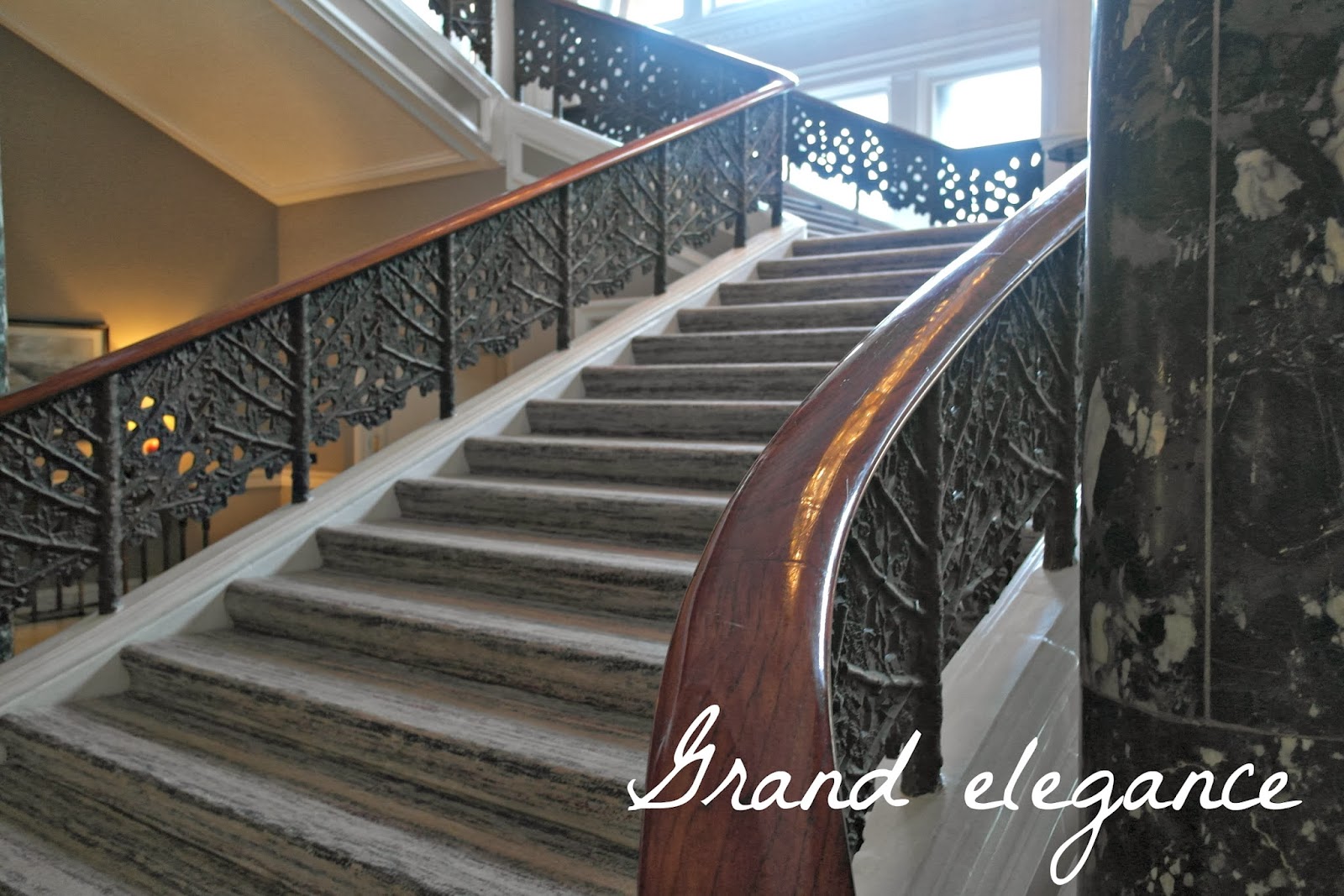 I did notice that you could treat yourself to afternoon tea in this particular area, plus each time I visited there was some sort of live classical music such as pianist or harpist.  Having this sort of music really sets the scene for the tasteful elegance that sets this hotel apart. You could however just enjoy a cocktail in the sophisticated Caley Bar located just off Peacock Alley. The hotel has a variety of cuisines to chose from on site and I was booked in to eat at the Parisian inspired Galvin Brasserie De Luxe.  After being opened in September 2012, the Edinburgh restaurant run by Michelin-starred chef brothers Chris and Jeff Galvin was created after the popularity of its sister branch in London.   Having heard about it being awarded the Michelin Bib Gourmand in September 2013 I was very excited to be dining there.
I was meant to be going for dinner with my other half (who is a head chef at a bistro where we live) but unfortunately he was no longer able to make it so I decided to dine for one.  I did think it may be a touch awkward but the staff were very welcoming putting me at ease straight away. 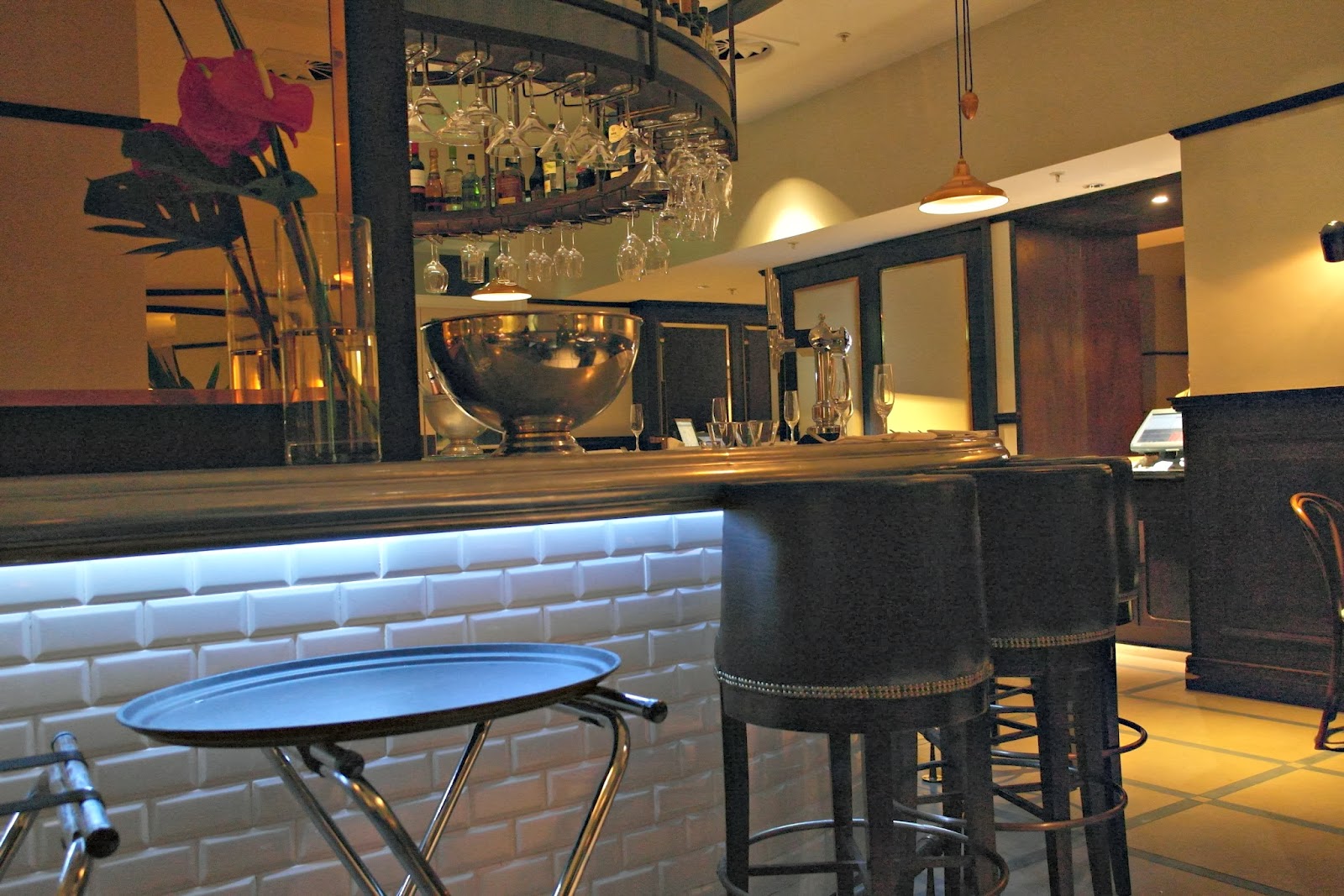 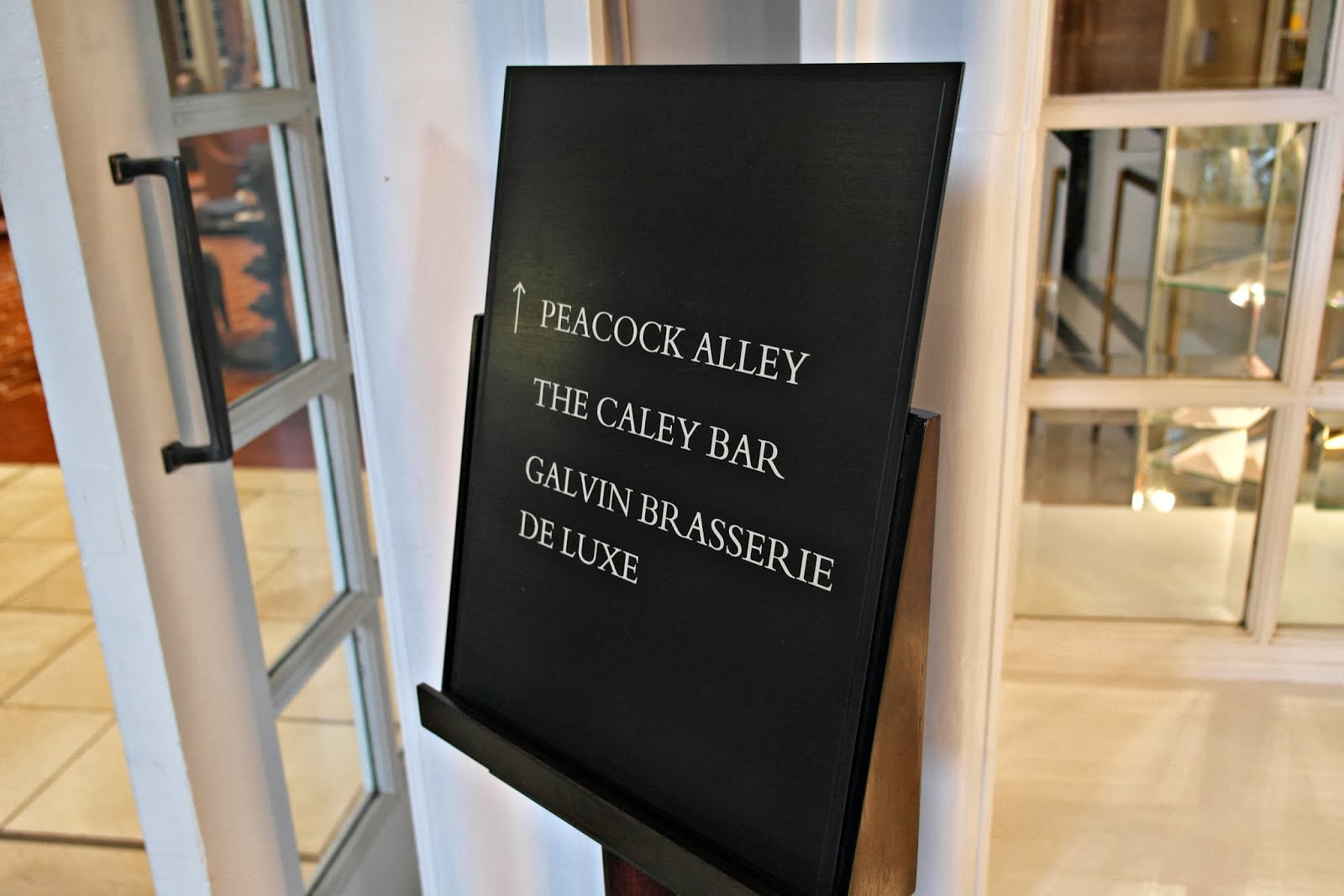 The layout of the restaurant was very welcoming with the perfect mood lighting.  It was clearly appealing to a variety of people, not only to couples but there were also celebration meals going on and families treating themselves to an evening out.  The interior was very much cafe meets fine cuisine with its relaxed look french chairs, rounded central
bar and very much contemporary meets
Parisian chic.

After being taken to my seat I was given the menu.  Firstly I was gutted my other half couldn’t join me as after living in France for a year we adore French cuisine, and this menu was full of such an eclectic mix it I was spoilt for choice. 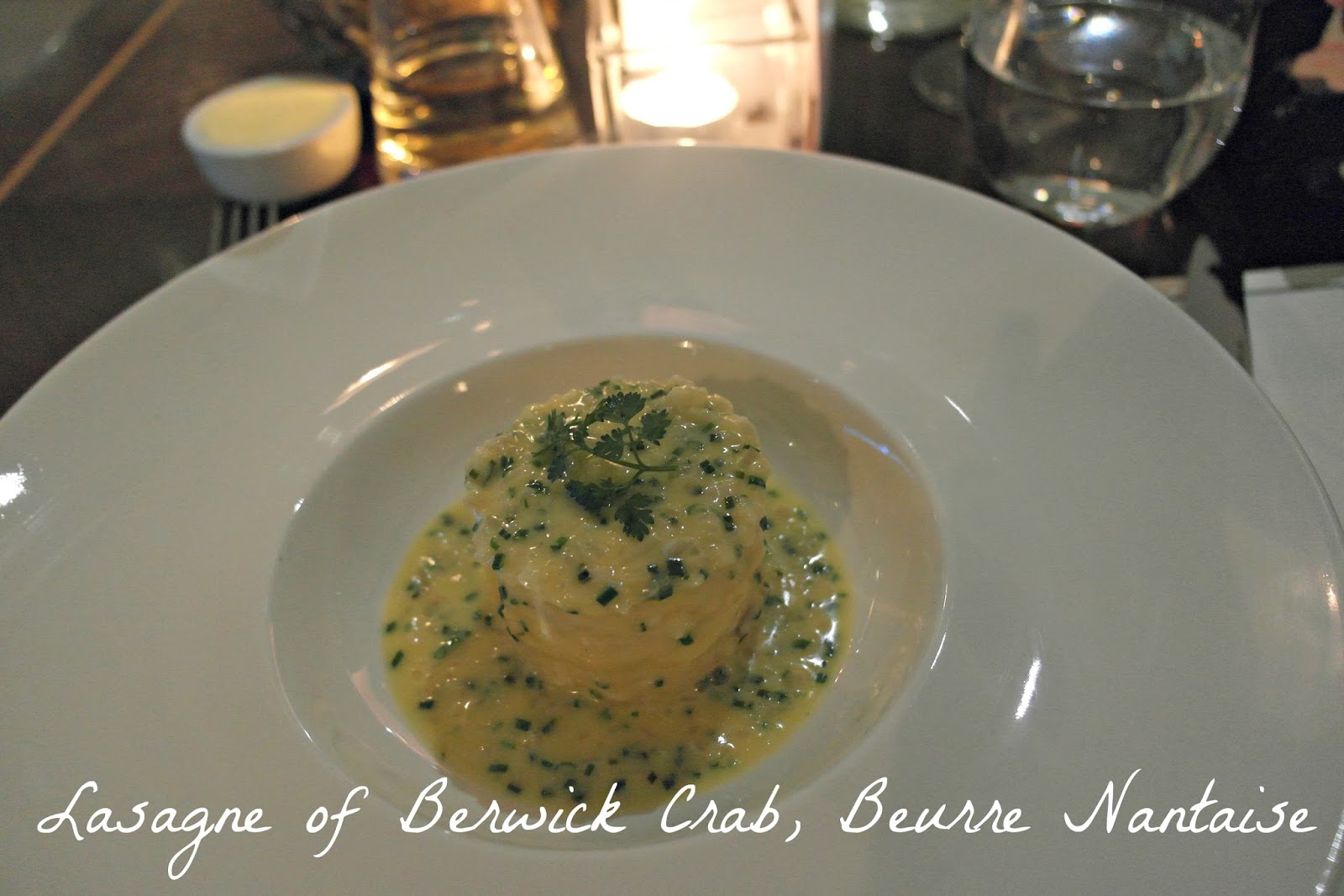 After looking over the menu I was asked if I’d like some wine, this particular recommendation had a distinct apple flavouring behind it with a very floral aroma.   My waiter for the evening then suggested as my starter to have the Galvin signature; Lasagne of Beswick Crab, Beurre Nantaise.  Usually I would of chosen something like their Pressed Terrine of Ham Hock, Landaise Chicken, Foie Gras, Celeriac Remoulade, but this other starter really appealed to me.  I am a firm believer when you are eating out sometimes it’s healthy to try something out of your comfort zone. 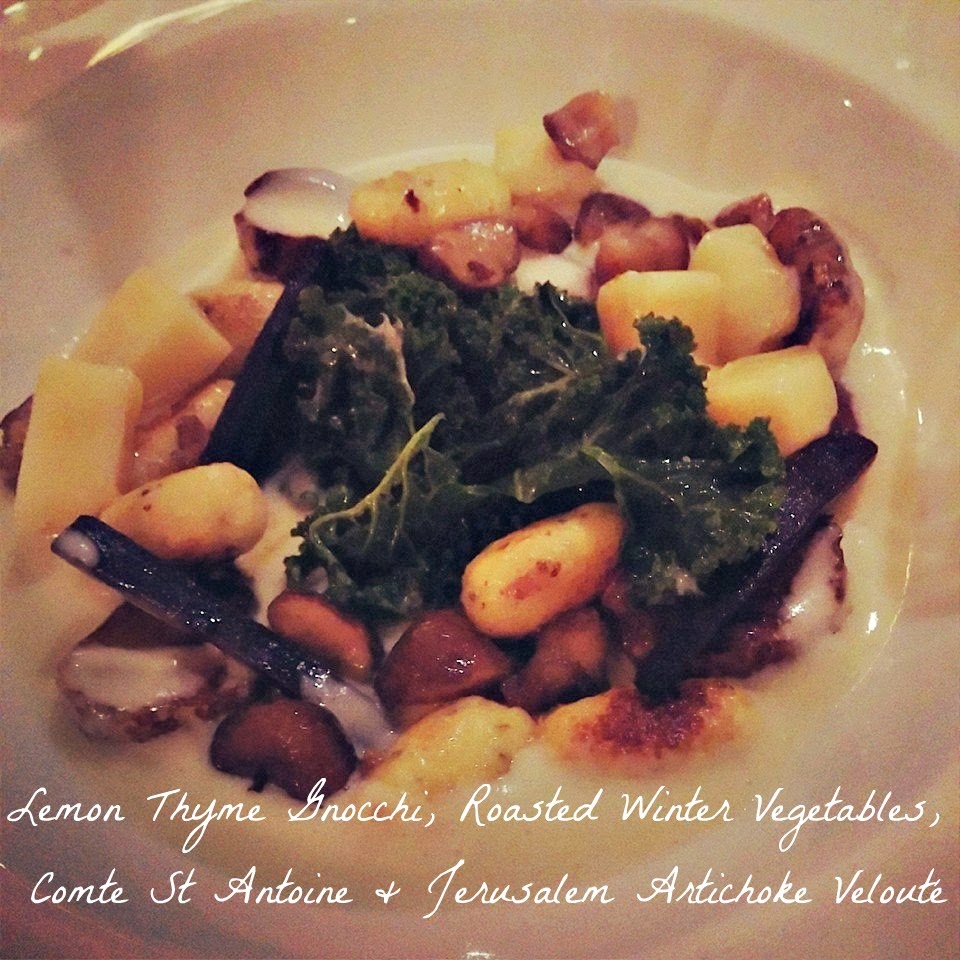 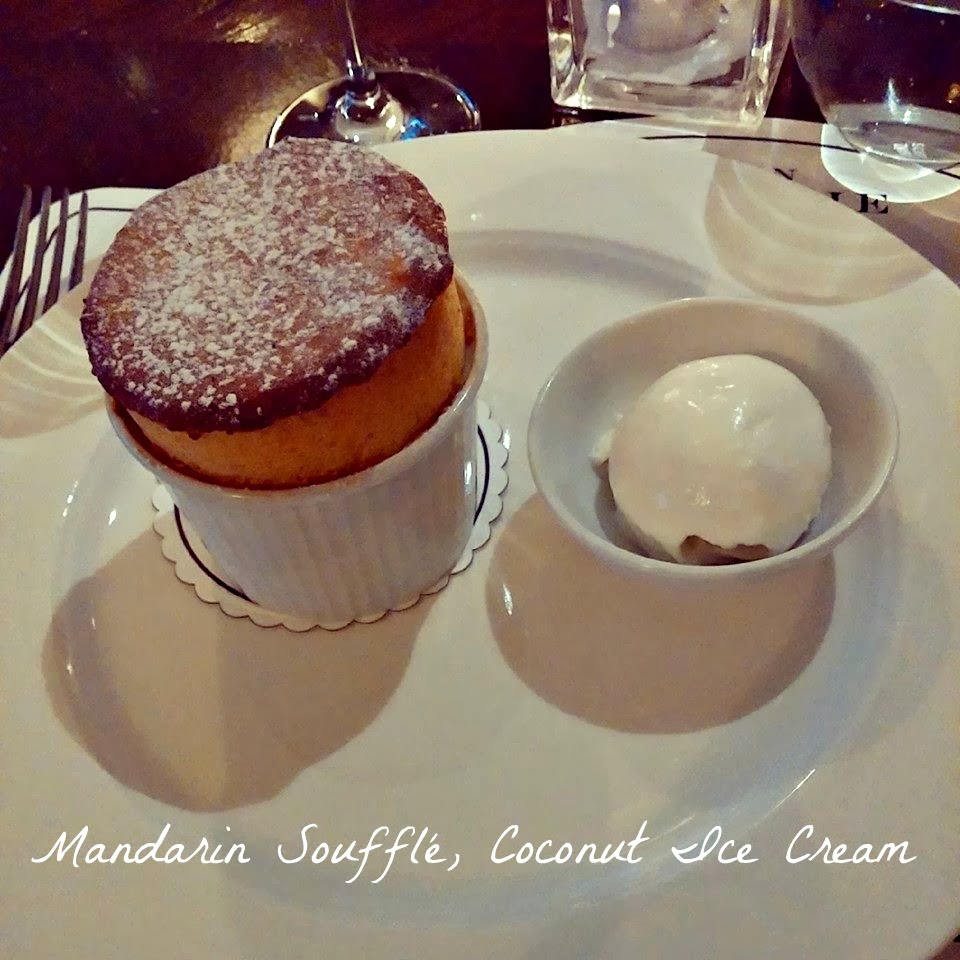 I couldn’t quite get over how much I enjoyed the starter with its tasty layers, and even though it was had a
very buttery taste it wasn’t dominating the course. The next was my main and I was immediately drawn to the gnoochi, which is one of my favourite dishes, so I was interested to see if it could top what I’ve already had many times.  The main came perfectly presented with the ideal portion size, it was gorgeously creamy but not over powering, tamed with zesty snaps of
beetroot and chestnut to colour and texture.
My dessert would of usually been some sort of chocolate inspired dish, but again taking advice from my waiter I went with the souffle.  Again a dish I couldn’t fault with it’s beautiful textures and very enjoyable sweet taste.

The staff were very efficient and even though clearly quite
busy remained very calm, polite and as if the job was effortless.  We’ve all had experiences of poor service but the staff at the Galvin restored my faith in hospitality and service with a smile.

I only wish I could have a quote from my head chef partner to emphasis how mouth watering each course was, but you will simply have to believe me when I say it was the best meal I’ve had out in a long time. 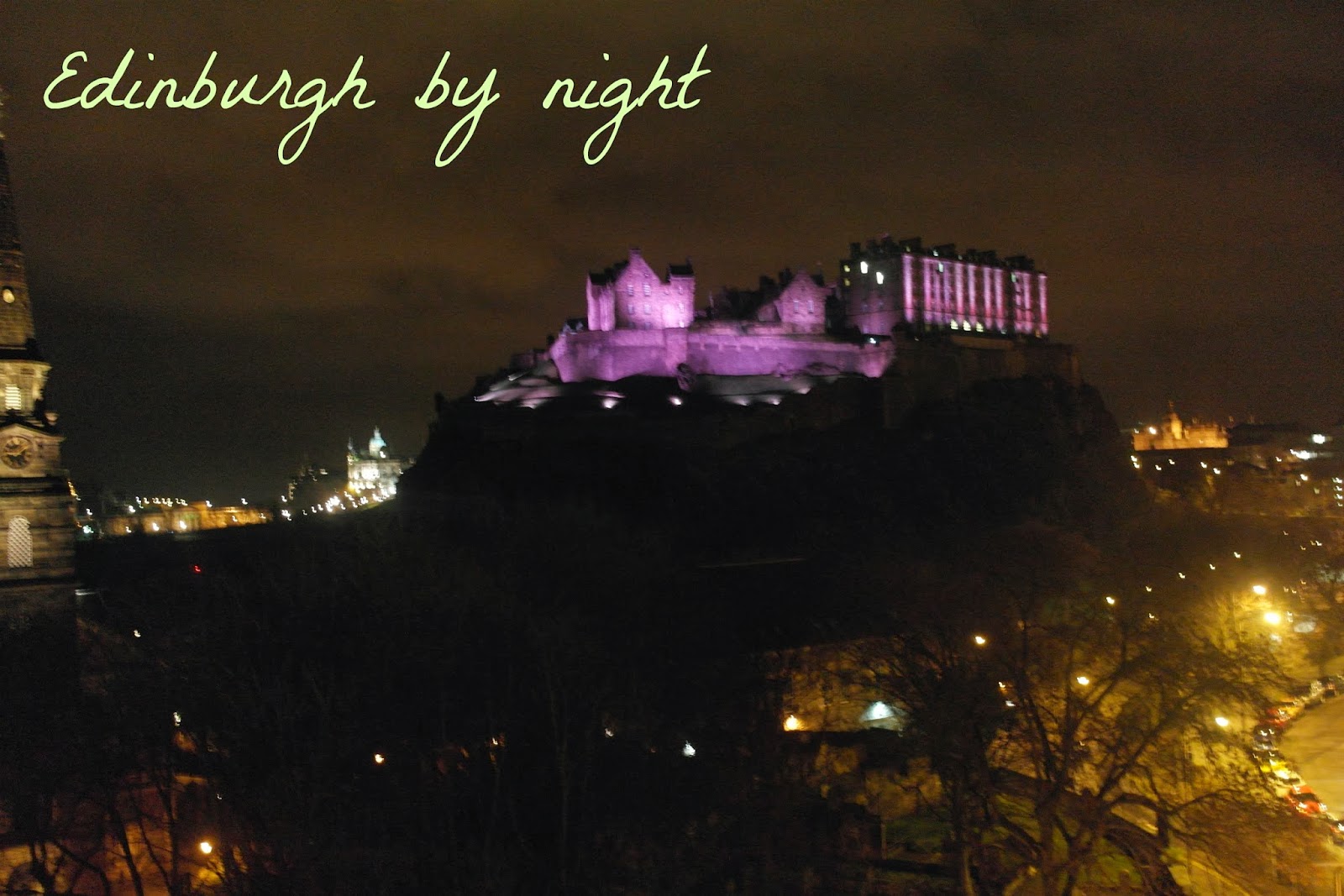 After a wonderful day in Edinburgh and delicious meal I went to bed looking out on this view of the castle.

In the morning I went downstairs to breakfast and once again was greeted by a friendly member of staff, he talked through the breakfast process then escorted me to my table.
There was a wide selection of foods in the self service buffet, but you could also order items so I requested some poached eggs.  You were offered fresh orange juice and tea or coffee, but you could have a cappucino or a latte if you so desired. 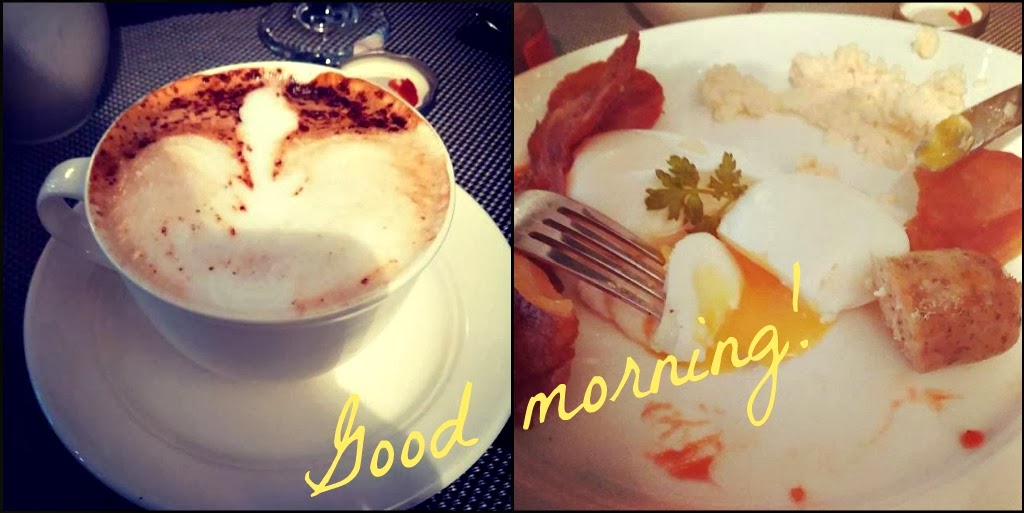 I had a very relaxing breakfast experience because unlike other hotels I could just enjoy reading the paper and eating at my own leisure without feeling hurried along.

Checkout time was 12pm but as town was so close I decided to check out after breakfast, leaving my luggage with the kind gentleman on concierge then heading to the shops.  The hotel were more than happy to look after my bags before my flight even though I had checked out.

To summarise I’d certainly say the Waldorf Astoria Edinburgh – The Caledonian is in the perfect location for all that Edinburgh has to offer.  Close by is the Edinburgh Castle (can be seen from Castle View rooms), The Edinburgh Dungeons, Mary Kings Close (review coming soon), the boutique shops and the amazing resturants on site.
Staff were by far the most helpful and attentive I’ve experienced when staying away, which of course made the experience all the more relaxing.

Easy to get to, superb rooms, fantastic staff, excellent costumer service, out of this world food and pure comfort… I can’t really fault it and will certainly be taking my other half back to stay next time!