Scoff & Banter is a small chain of restaurants
you may have spotted dotted around London. When I previously stayed at the Radisson Mercer Street hotel I noticed one just behind it, and I must admit I was sad I hadn’t had a chance to dine there sooner. The exterior looked very inviting!

Luckily my partner and I were staying in London for a wedding suit fitting, so we took the opportunity to try out the latest addition to the Scoff & Banter family in Kensington. Nuzzled amongst the grand buildings and only a short trot from Gloucester Road tube station is the Scoff & Banter Vanderbilt. 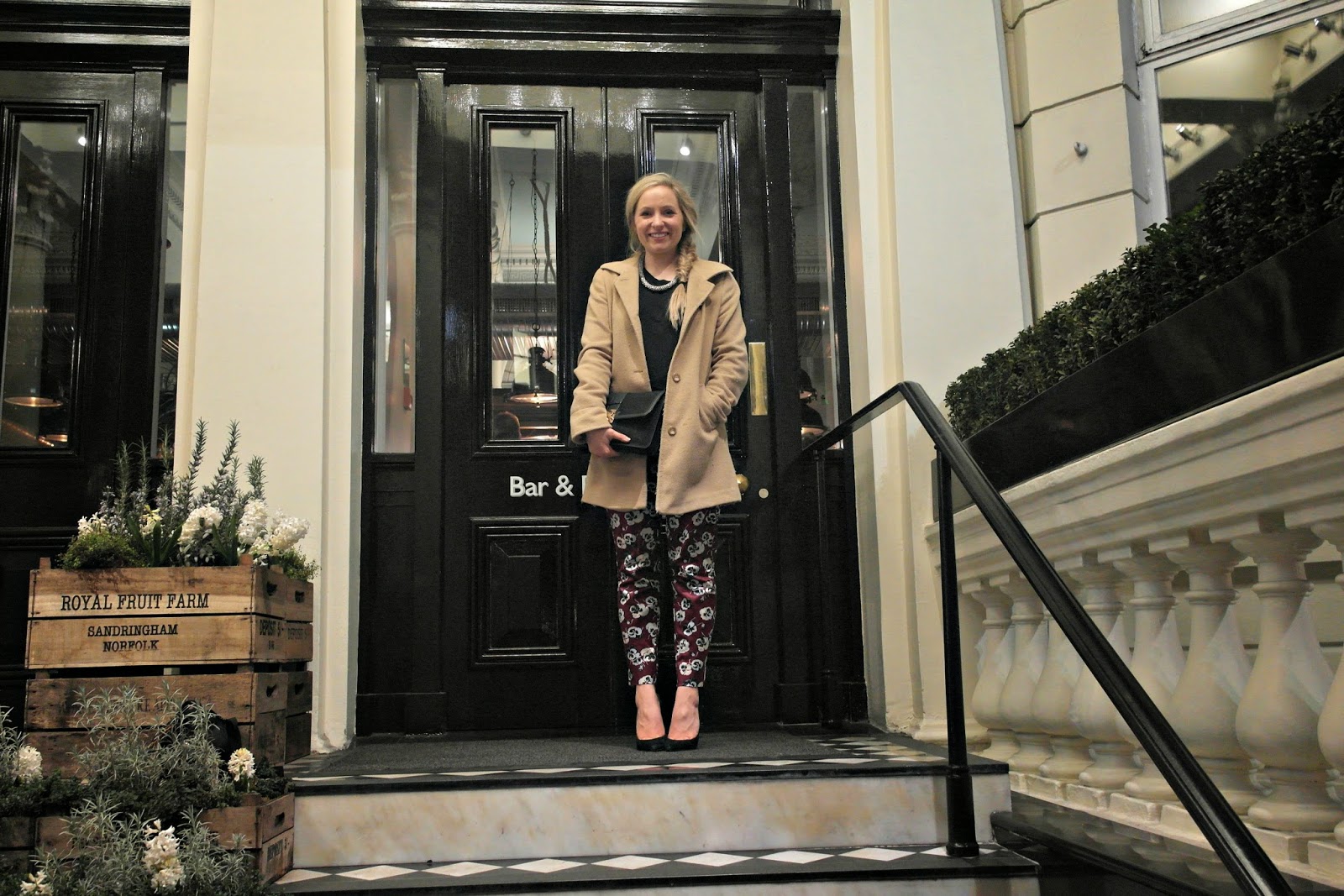 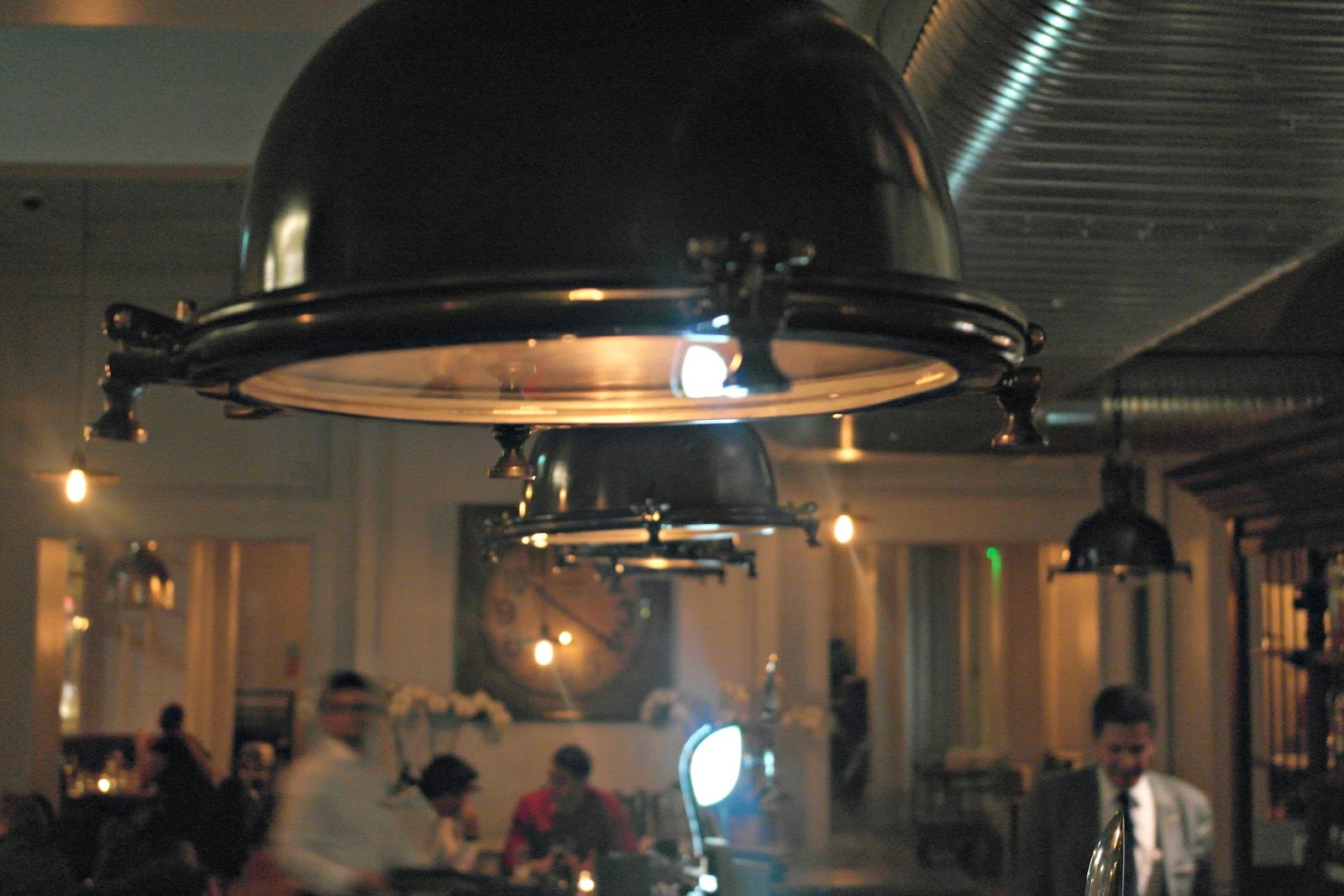 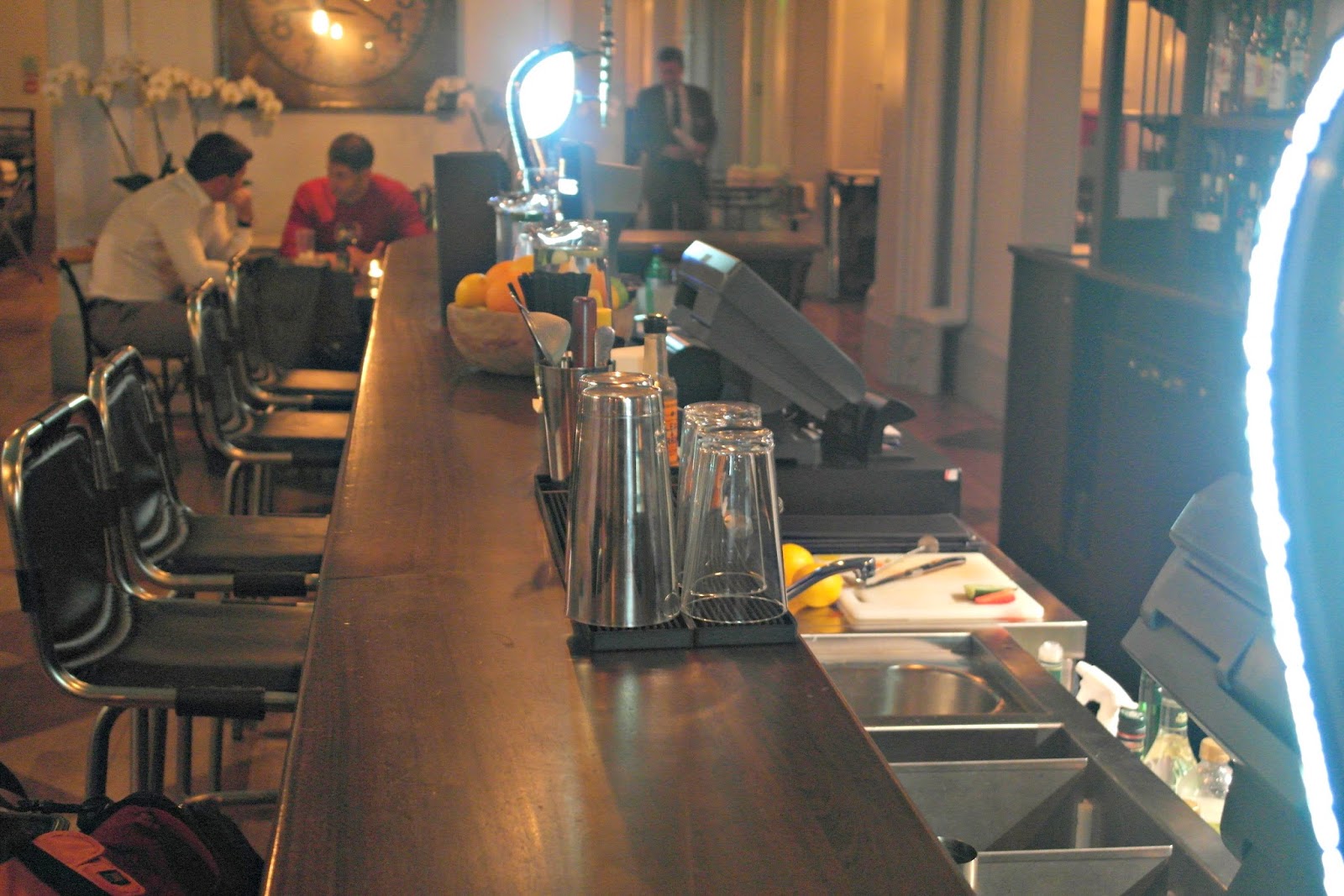 It looked very elegant with the simplistic exterior
including french inspired plants and white and black tiled flooring. There were stairs leading up to the restaurant from the pavement and as you walked up it felt like you were entering a grand townhouse in London. Actually it didn’t feel like we were heading into a restaurant at all – but maybe that’s not a bad thing? It felt exclusive, private and special. Even though there is nothing wrong with the location it did feel somewhat of a random place for such a restaurant, but perhaps me not knowing what is an up and coming part of London is the reason why.

We were greeted happily by the bar staff, and then escorted to our table, with outerwear whisked off to the cloakroom on our behalf.  The interior was ‘trendy’ yet classic and due to the mood lighting felt soft and inviting, immediately making me feel relaxed and at ease. Once escorted to our seats the waiter arrived with the drinks menu whilst we explored the food possibilities. A bread basket was soon on the table along with our wine choice, discreetly nestled on ice next to our seating area. 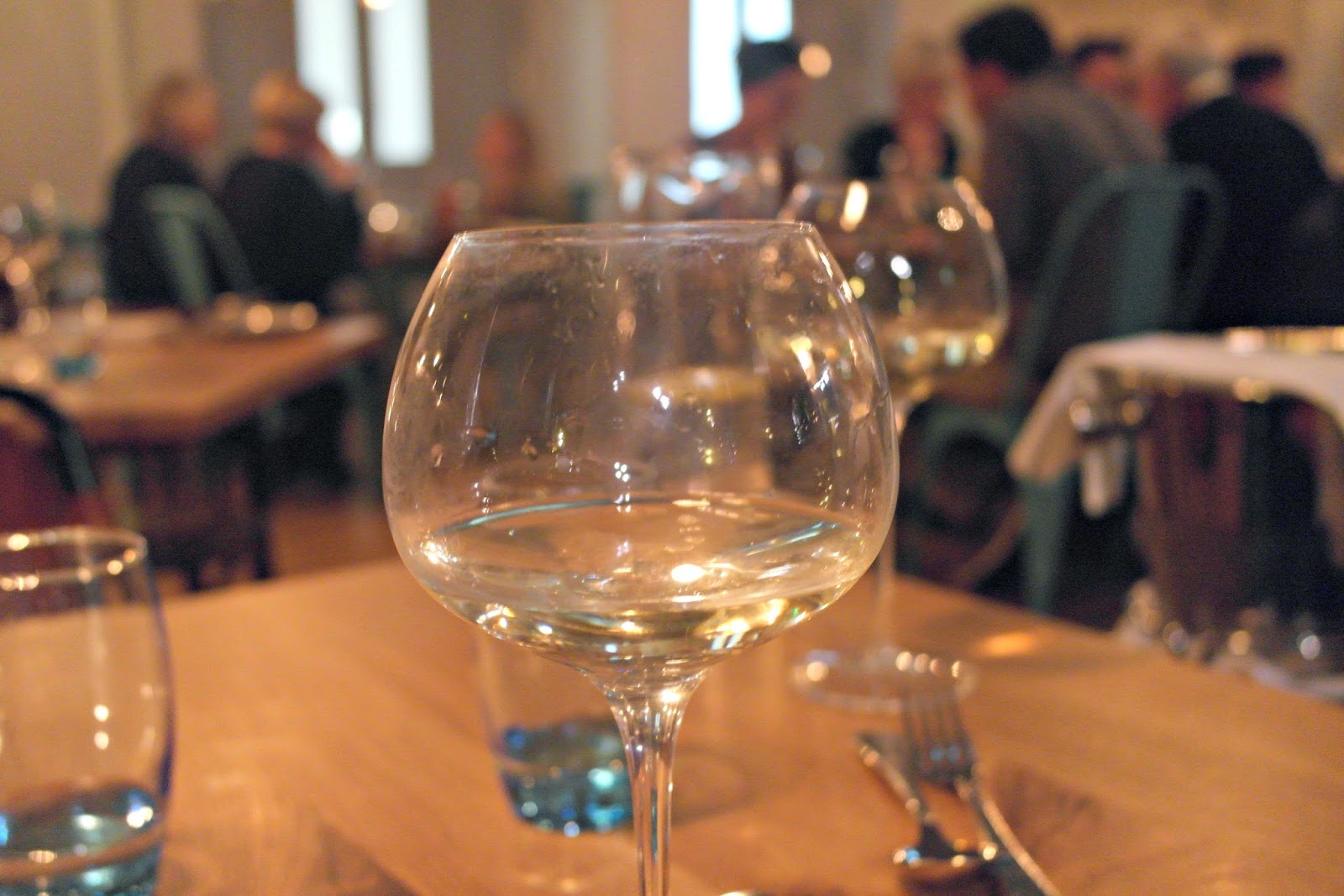 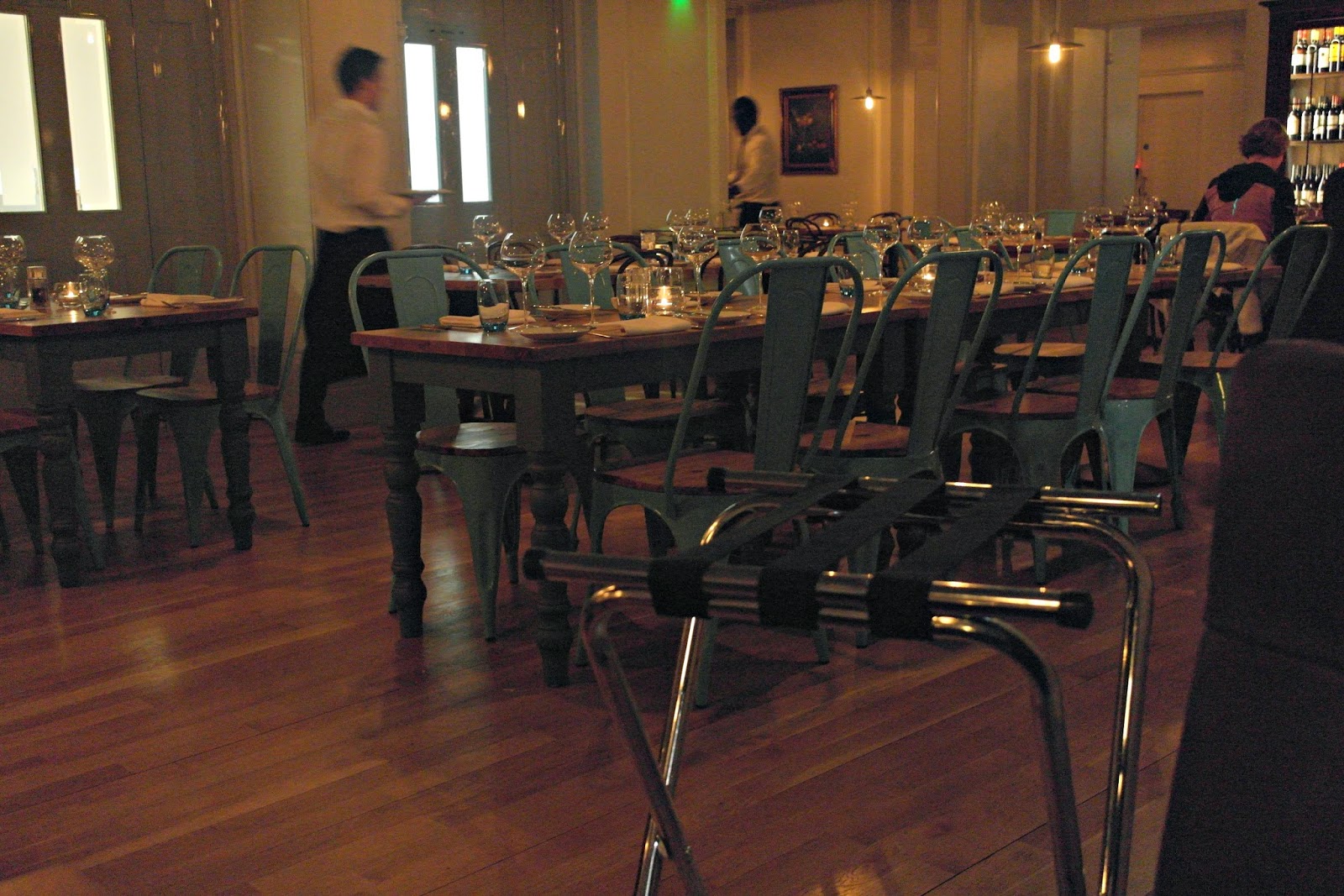 As we pondered the food menu, I looked around the room and took in everything Scoff & Banter had to offer. Everything felt inviting about it, from its tasteful contemporary meets rustic interior design (what I like to think as quirky yet stylish).  Large dining tables had been set out for parties so I knew from the get go it was already a popular food destination for groups and celebrations, but equally so outside the main dining area and towards the bar, many had just come for a quiet drink and socialising. I was quite surprised to be honest due to the unusual location on a main road.

Having my fiancé with me when dining out is always a true blessing. I can
sometimes remain in my comfort zone with food, and having his polite
encouragement to try something I wouldn’t normally encourages me to be daring! One thing you should know is that between the two of us, we are a reviewing dream team in the hospitality industry! Having both worked in it extensively for years and me also being a mystery shopper, we constantly pick up every little detail and appreciate how hard this environment is to work in.

Nick was actually a Head Chef for many years and worked in the catering industry for over 10 years, he doesn’t vocalise it when we go out but I always ask his opinion from that side. I believe sometimes we take for granted the challenges facing these kinds of businesses in an already crowded marketplace. 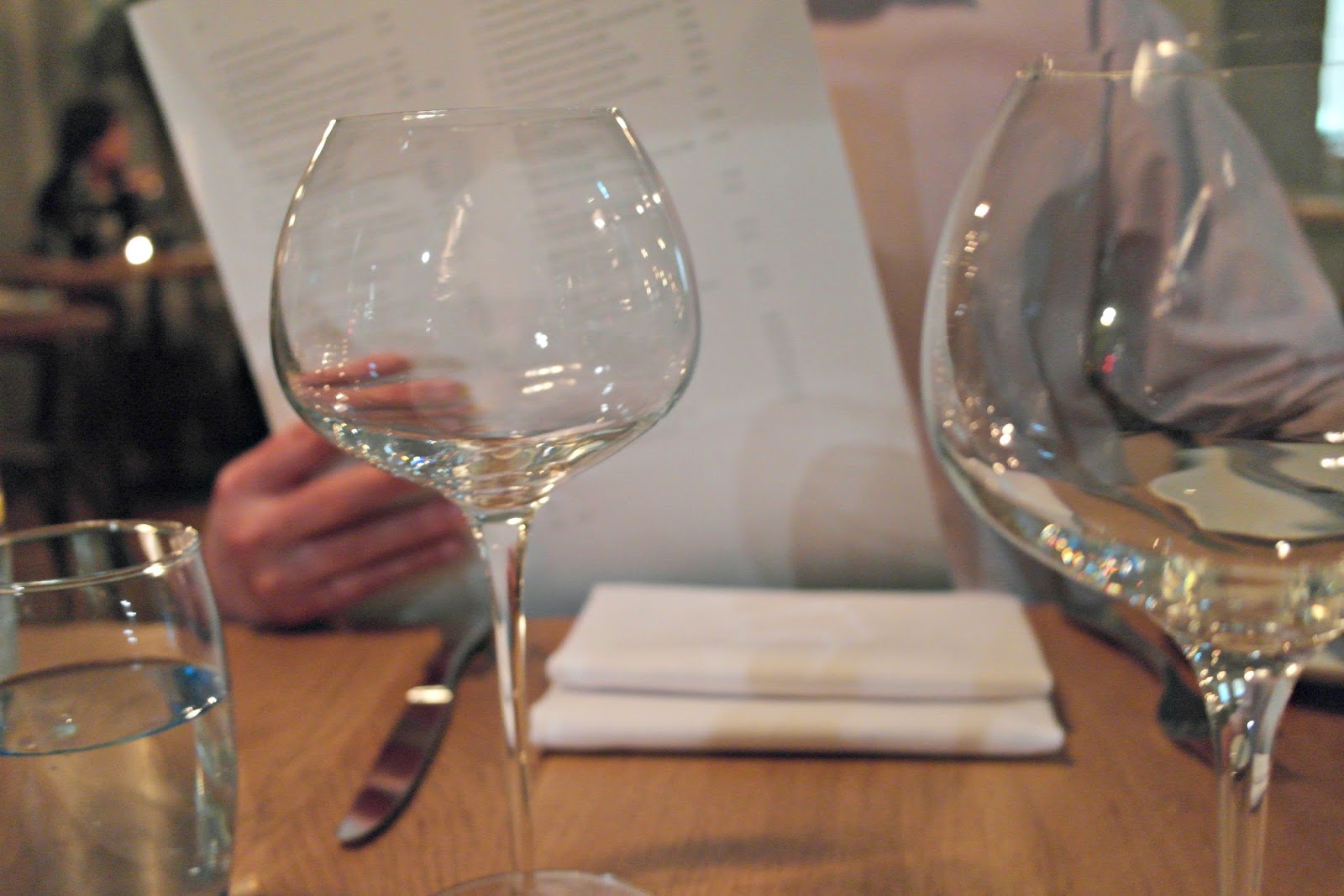 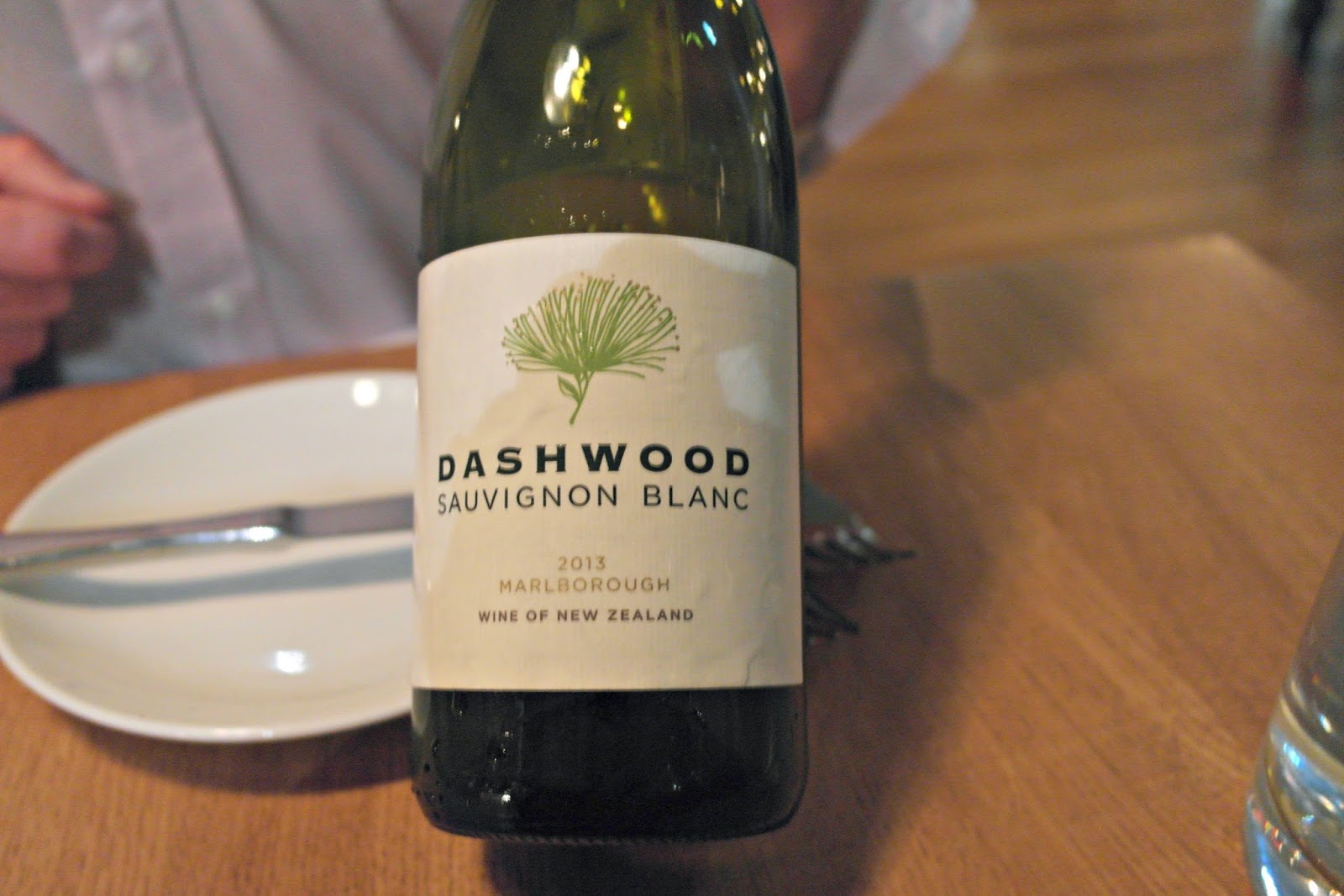 I tend to prefer a light bodied wine whether it’s with or without food; I felt the Dashwood Sauvignon Blanc, Marlborough, New Zealand 2012/13 was an fantastic choice. A delightfully delicate taste that was ideal for our dining choices.  Bottles of wine at Scoff & Banter start from £20.60.

I chose the game terrine and Nick selected the scallops to begin. I’d of normally stuck to a salad but tonight I was feeling in the mood for something new. My dish came very elegantly presented with an ideal portion size for a starter, often I find restaurants can either go one way or another with this.  The gin relish was to die for! I really felt
this particular addition to this dish set it apart from other similar meals I’d
had previously. Rye bread was very crispy yet delicate, but this evened out the textures and consistencies of the course with the beautiful tender meat from the terrine. 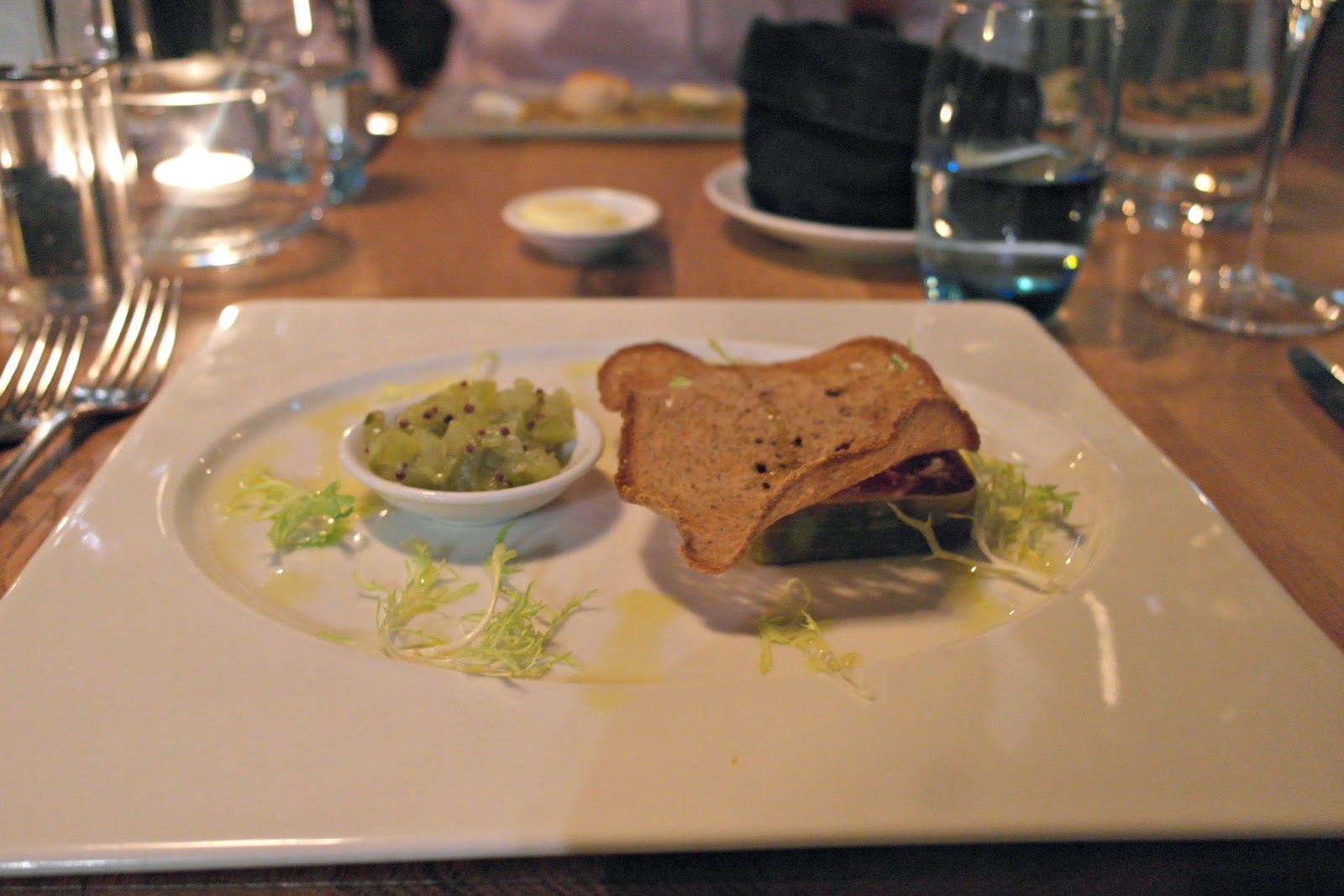 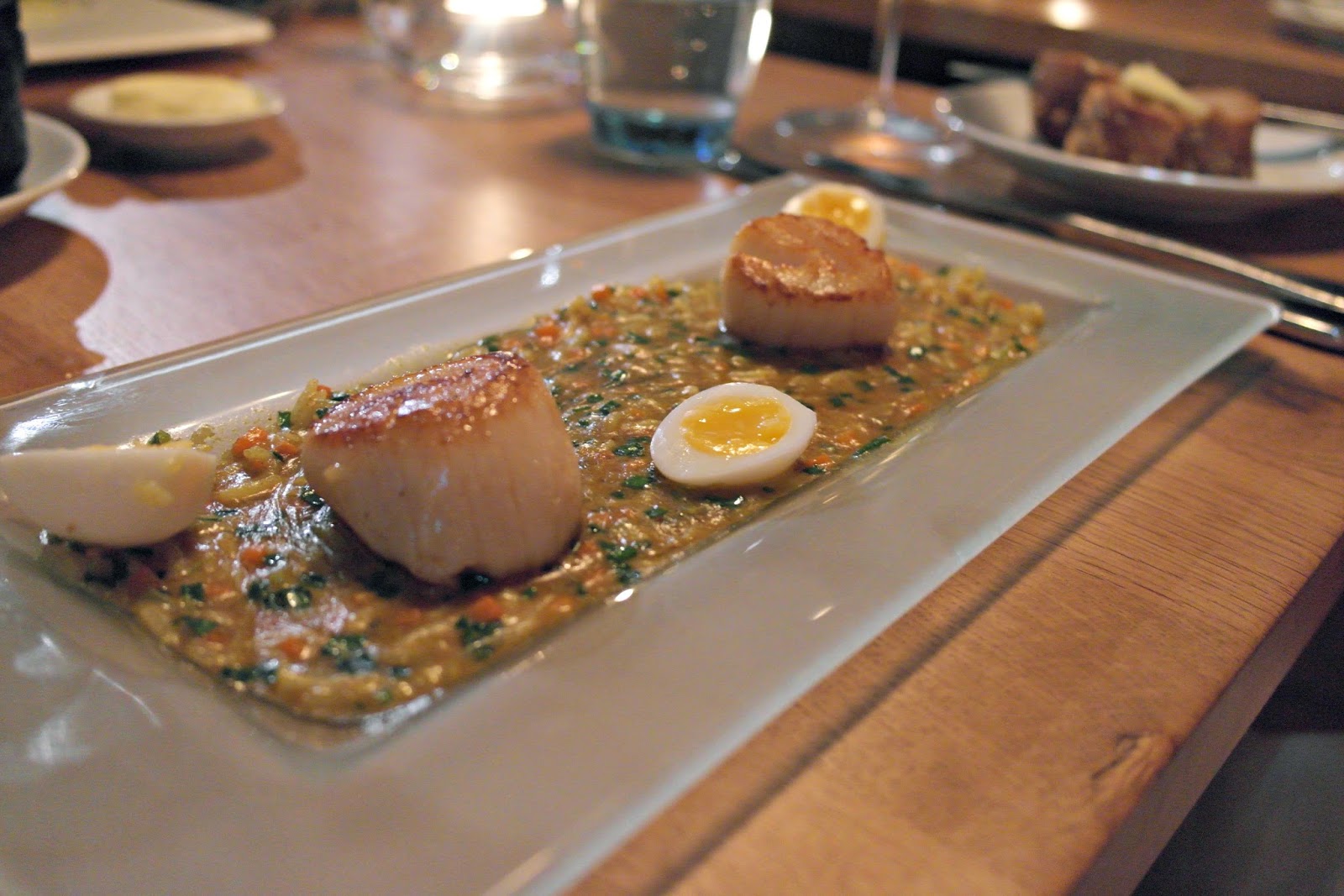 Nick loves scallops, I like them but I’m not the biggest fan.  I did try his and from what I sampled was very good. 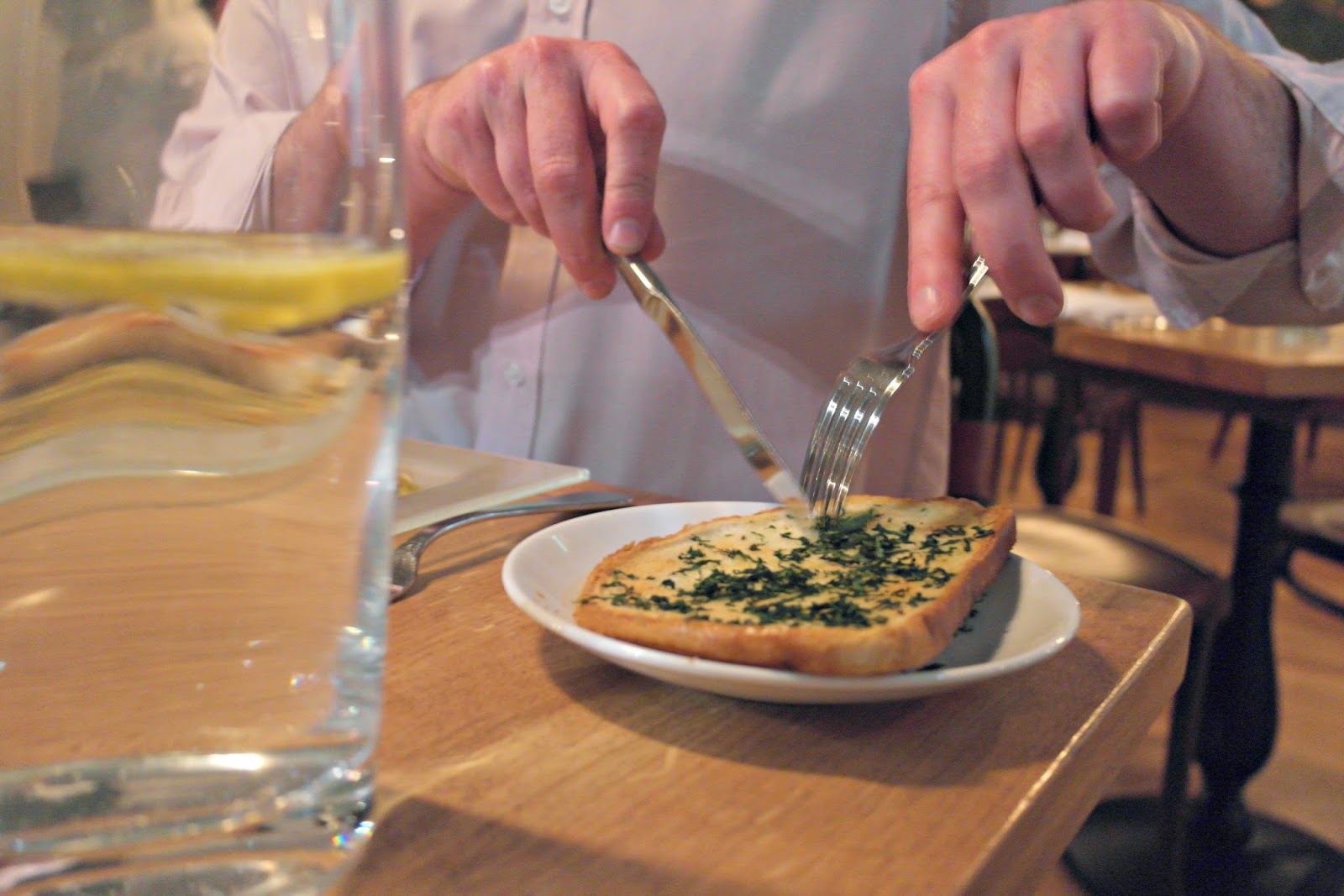 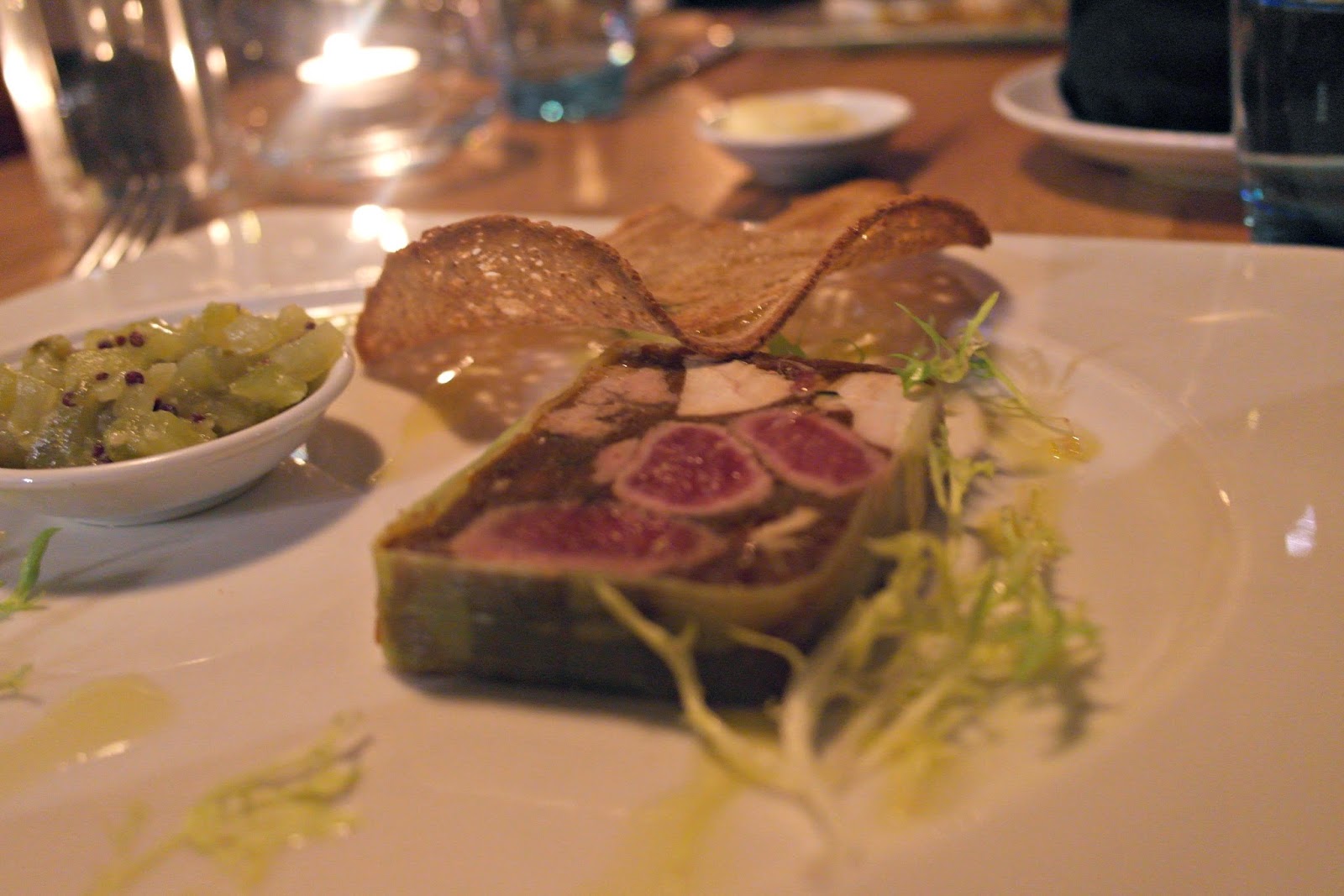 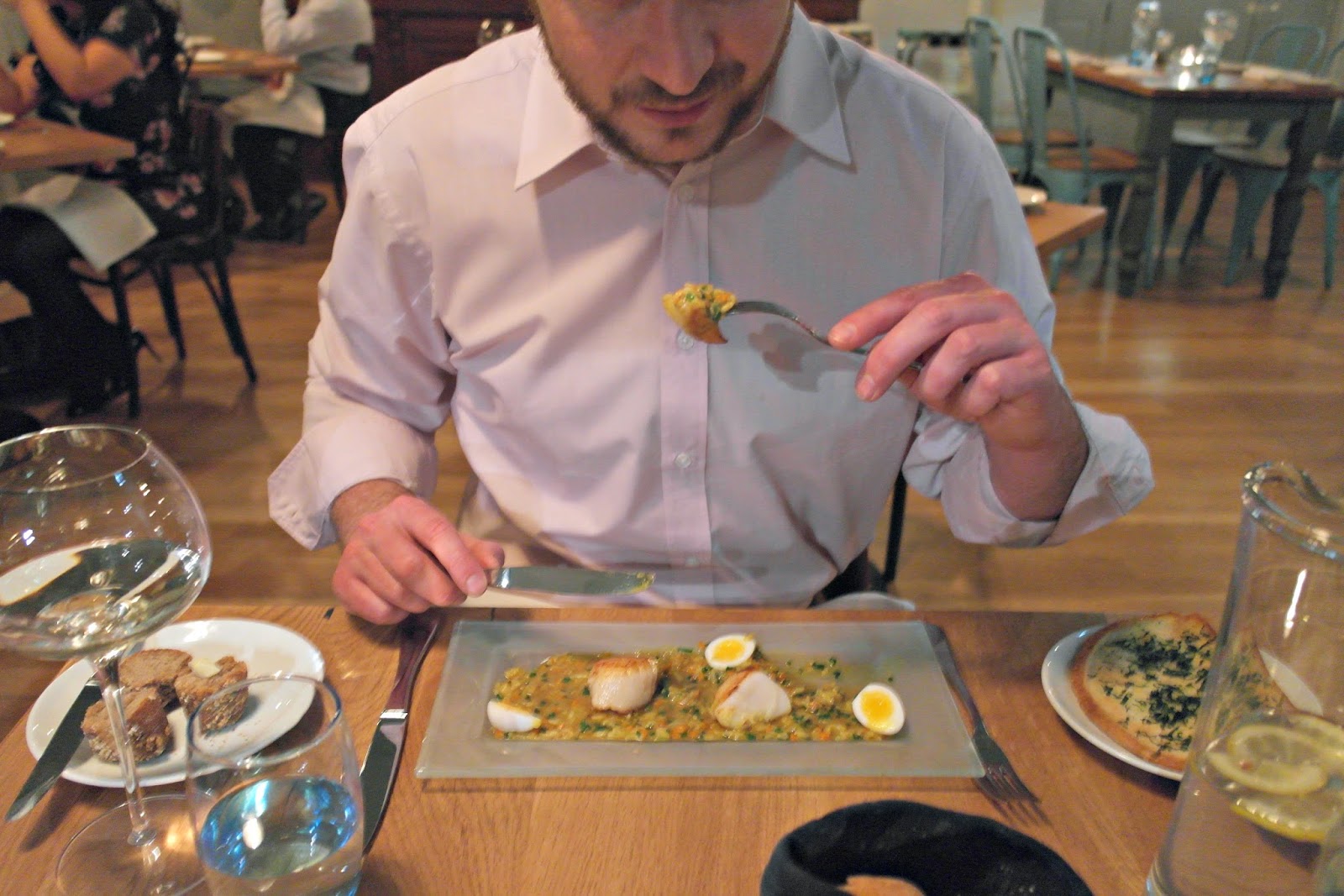 Our mains were Wild Bass and Veal steak.  Nick asked one of the waiters
what they recommended and decided the go with that.

My main
came with spinach dumpling (which I couldn’t wait for), I was slightly unsure
if this was going to make the dish too heavy, but due to portions it was
absolutely spot on and subsequently almost moreish, particularly teamed with
the cider emulsion. For my main it was a fine balance of warmth, texture and
nothing too overpowering.

I did of course try Nicks veal which he explained was one of the best he’d ever had. He told me that it’s a difficult meat to get right, and that often when chefs are in a rush it can be ignored, but this apparently was ‘spot on’. I have tried veal once and red meat isn’t something I tend to choose. The only slight criticism he had was that he felt a different sauce would’ve been more suitable, as there was a lot of ‘fat’(chips, buttered chop, egg yolk) and could’ve done with something a little more adventurous than more butter! 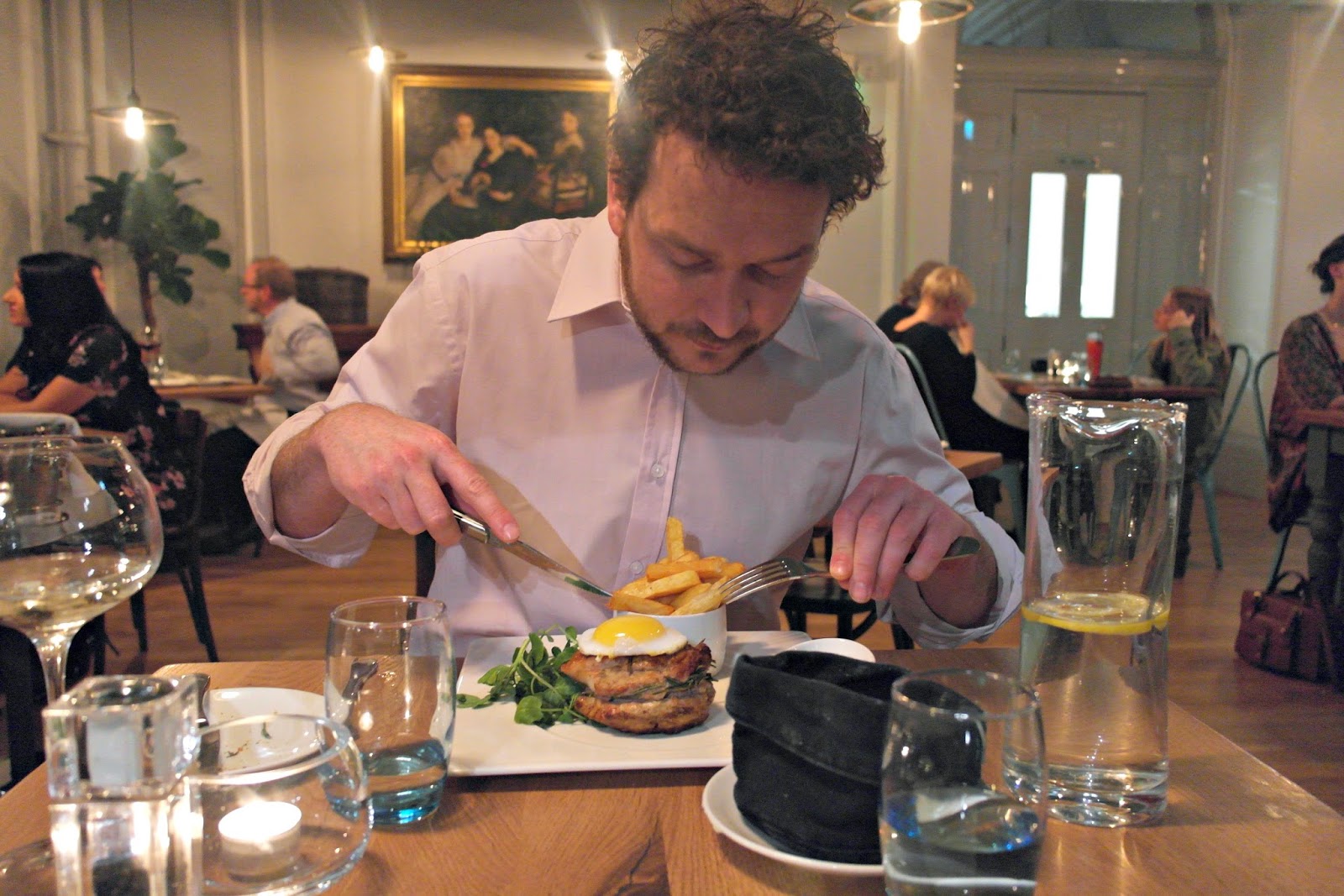 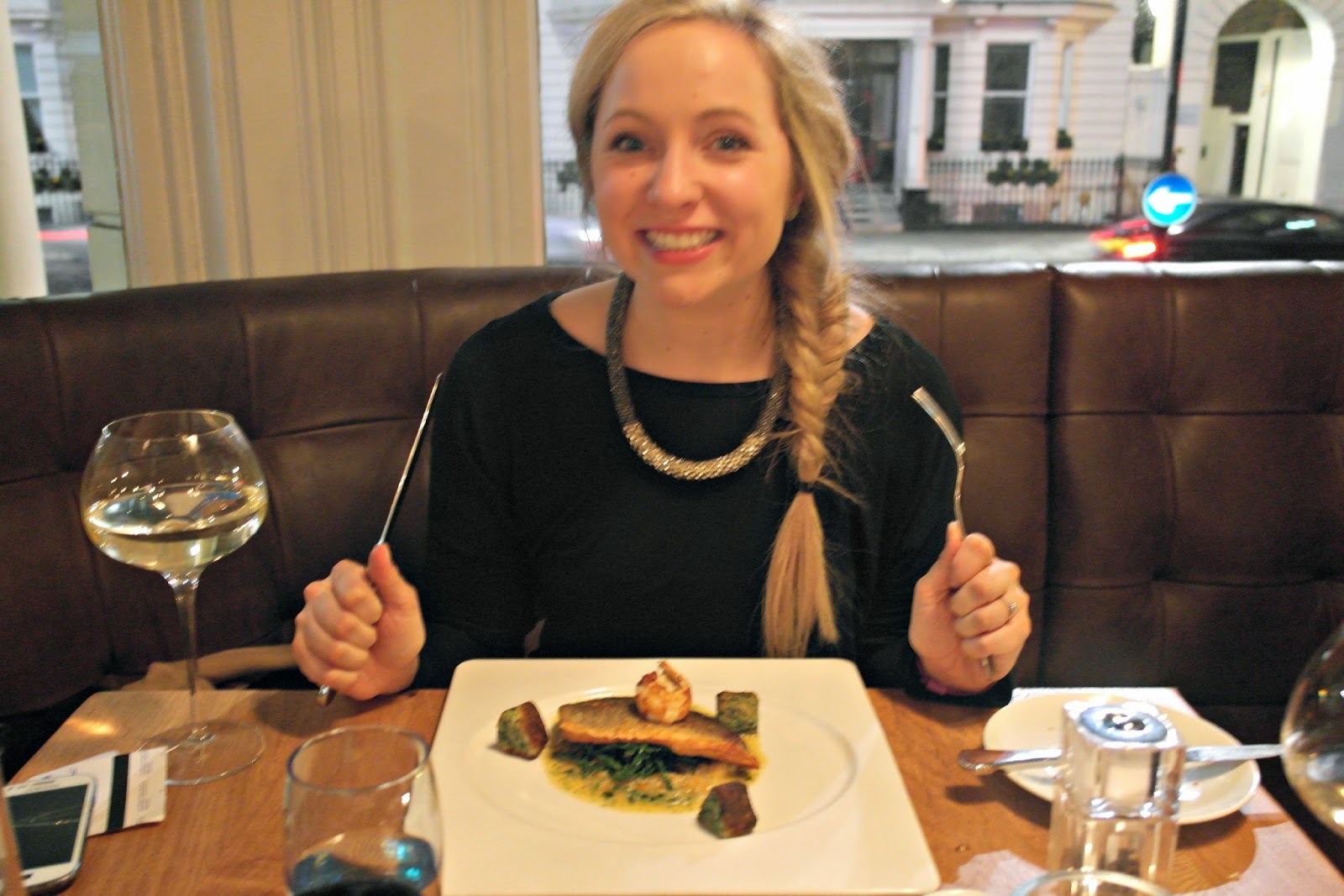 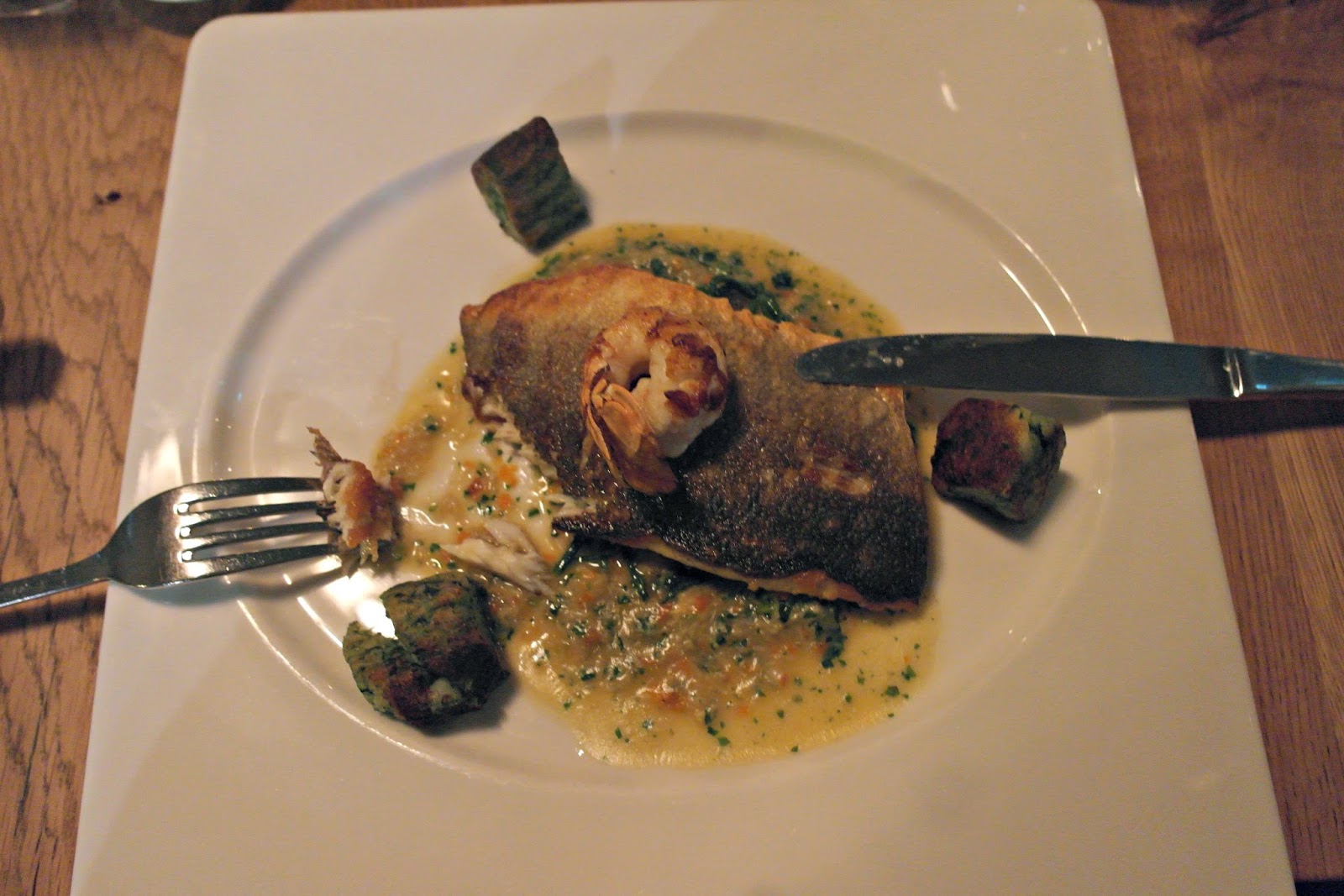 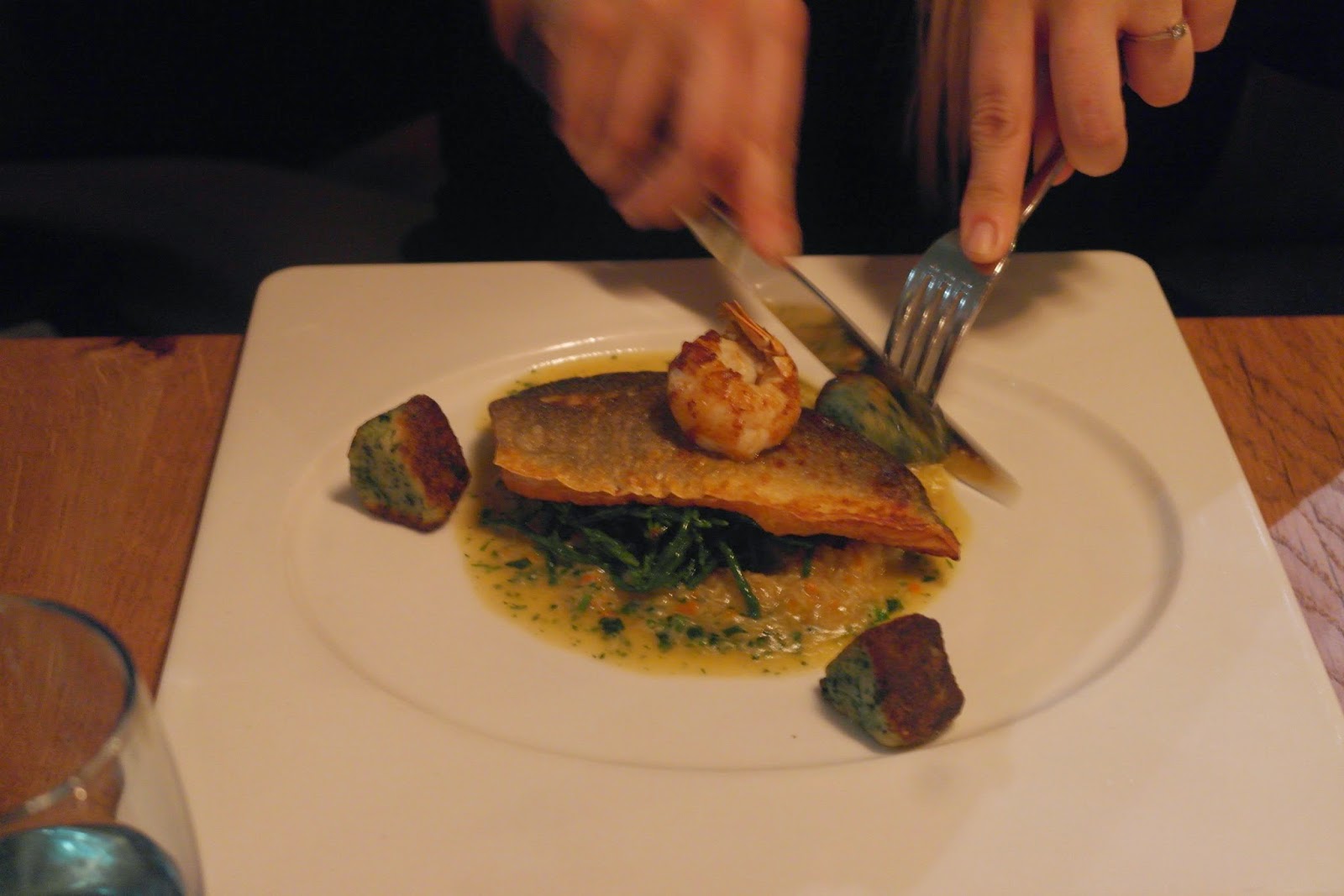 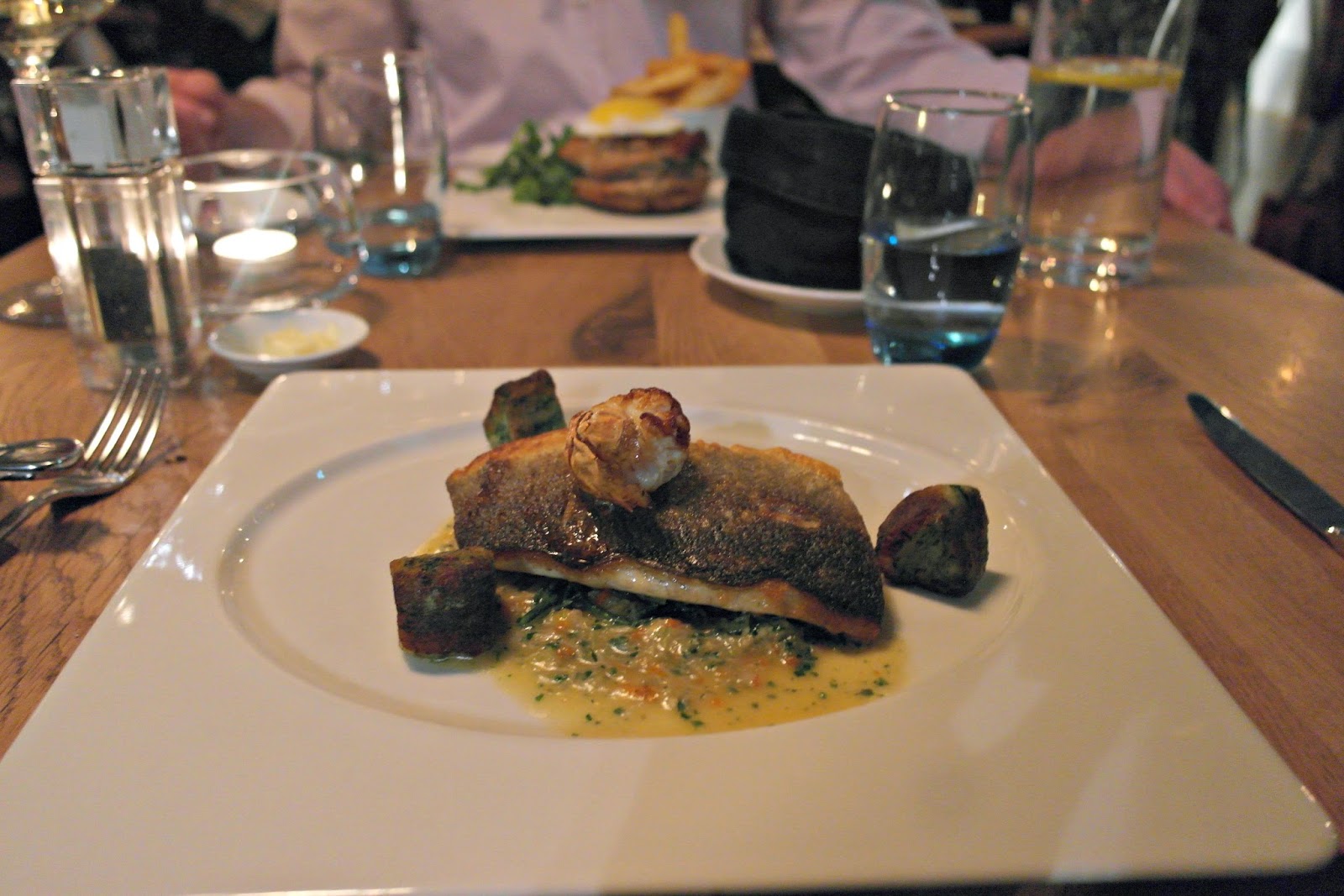 After such rich and tasty starters and mains we didn’t need a dessert each so instead decided to share the restaurants Assiette of English desserts. I am a big fan of smaller sample sized dishes as if you know me; you’ll know decision making isn’t my strongest quality, so this was perfect!  Each dessert was tasty, nothing as amazing as our mains but still very delicious – my favourite was the bread and butter pudding which normally wouldn’t have been my first choice. 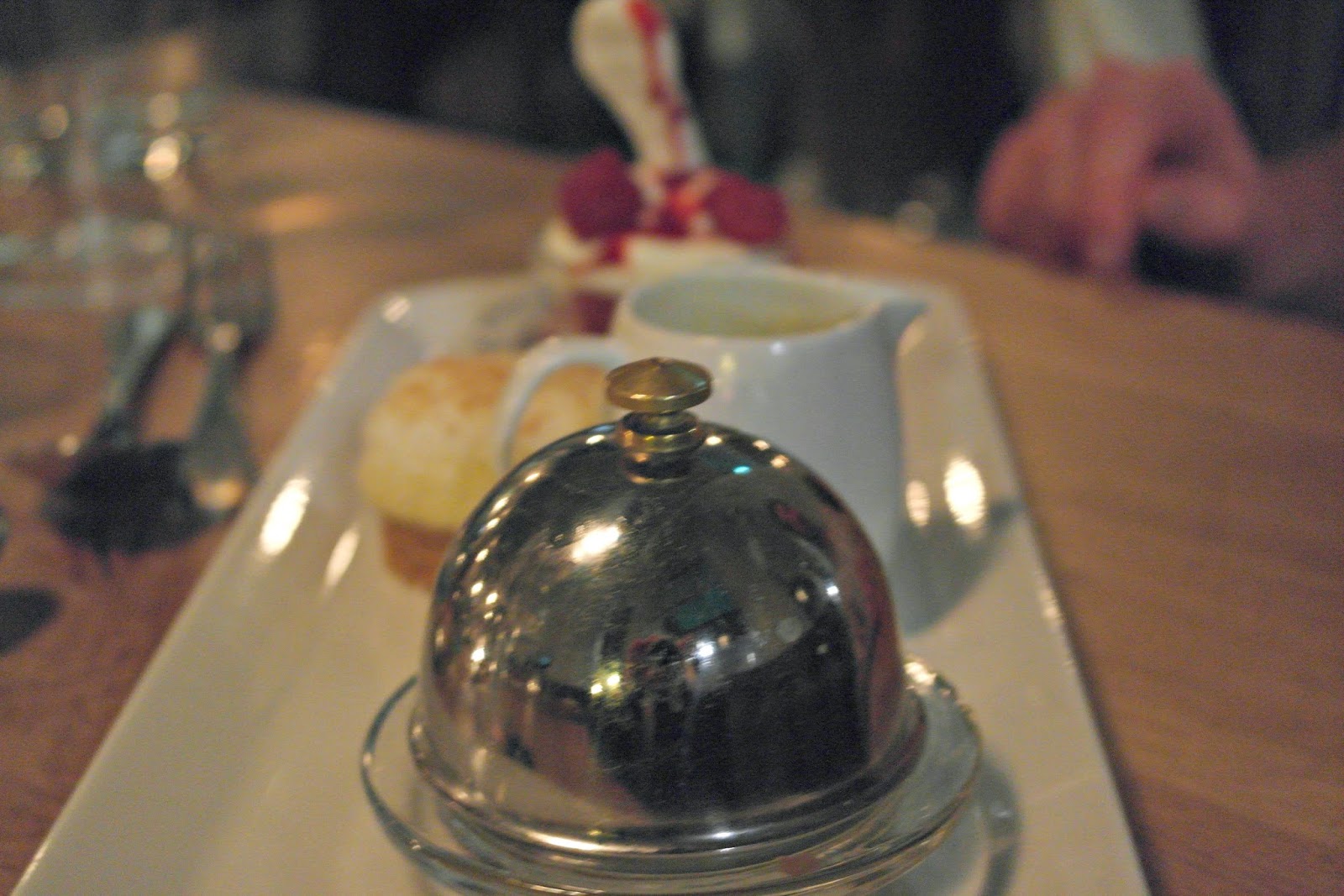 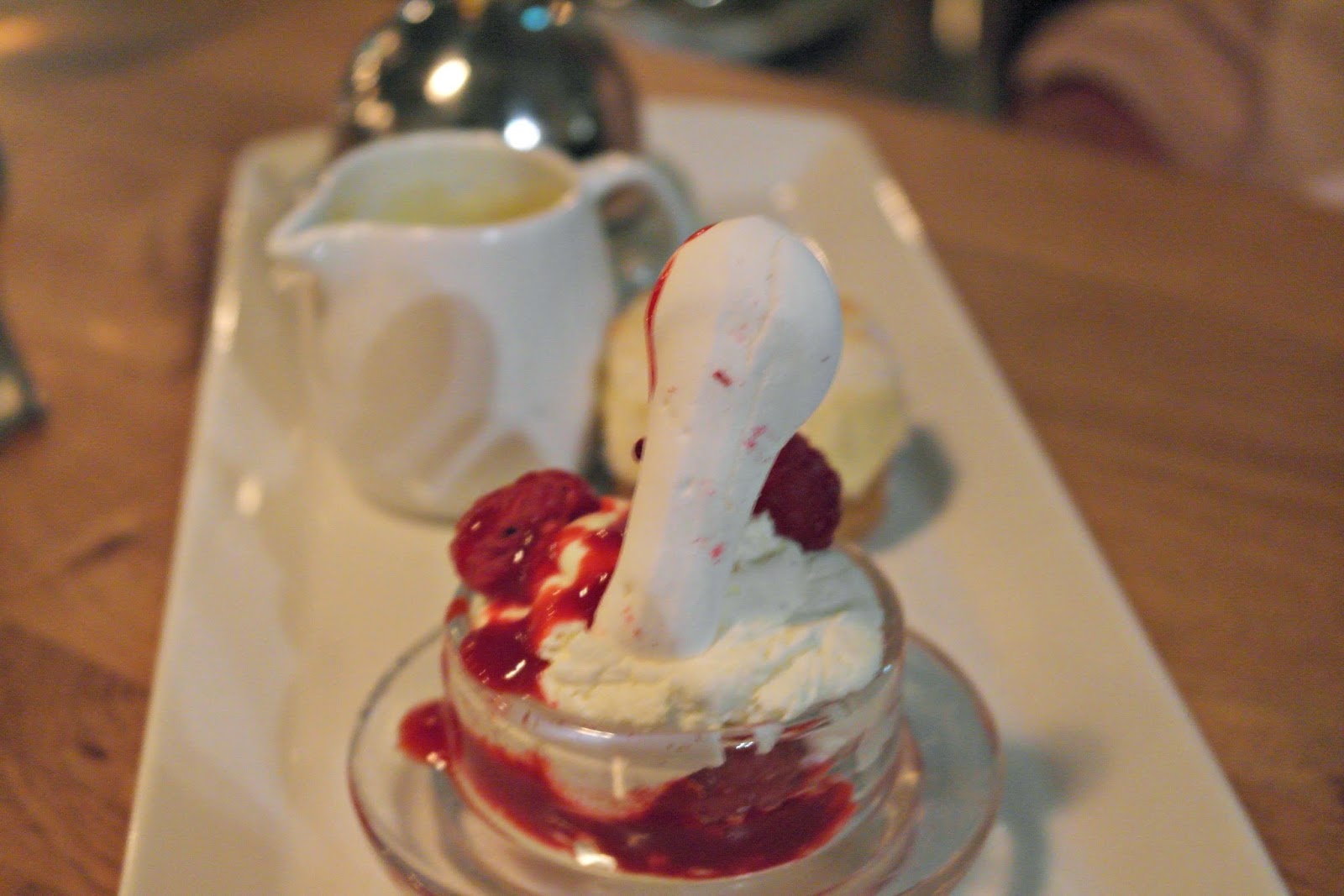 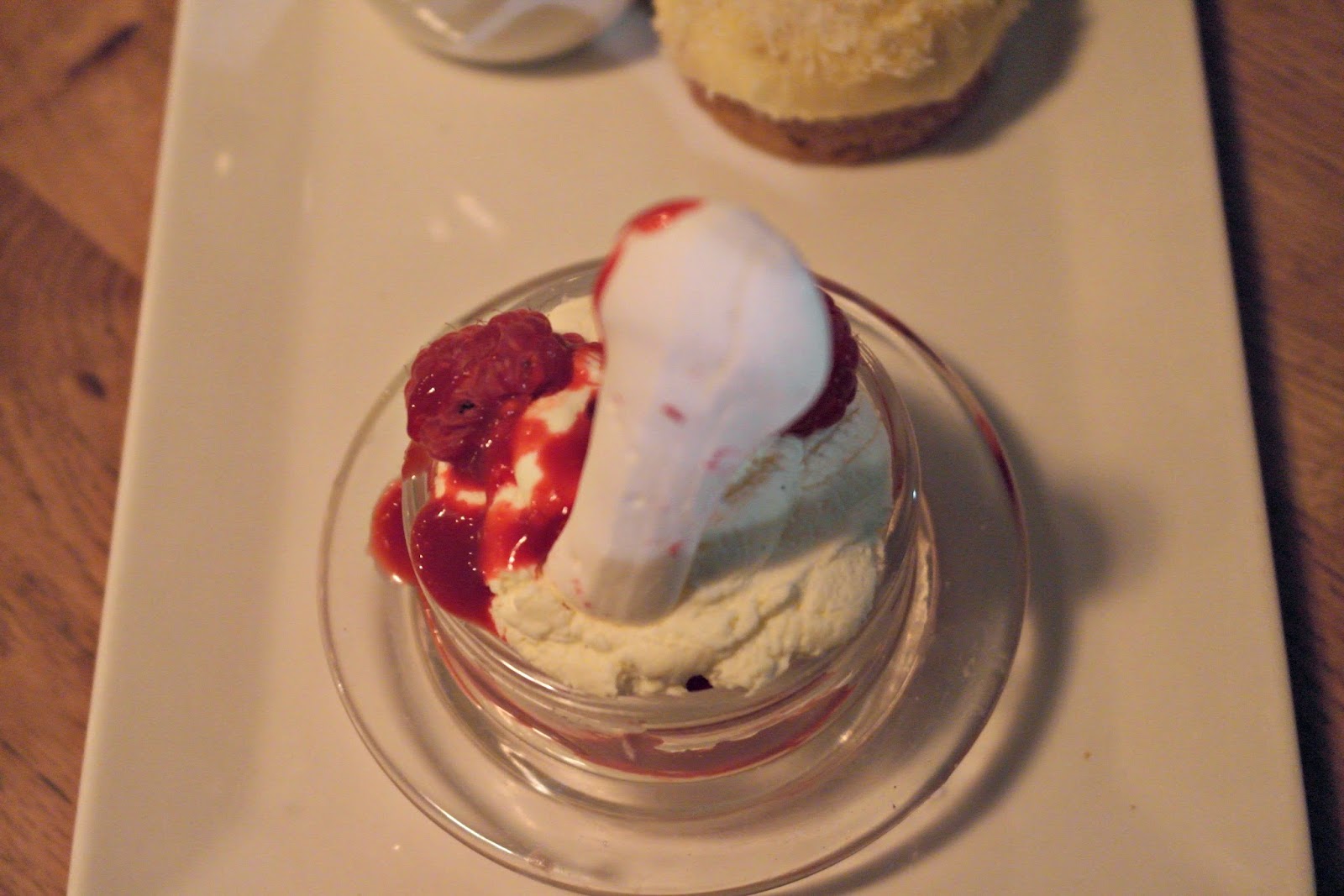 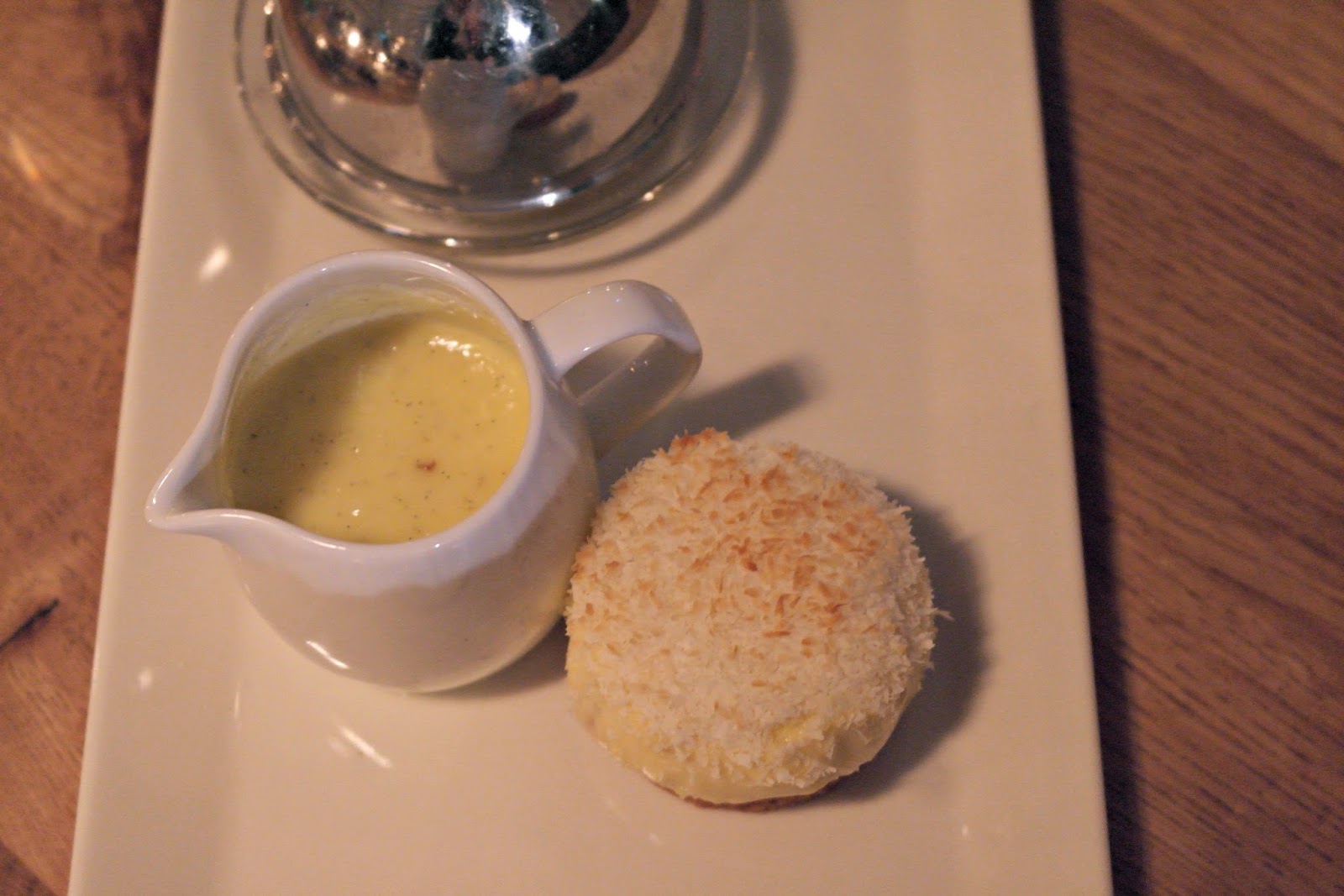 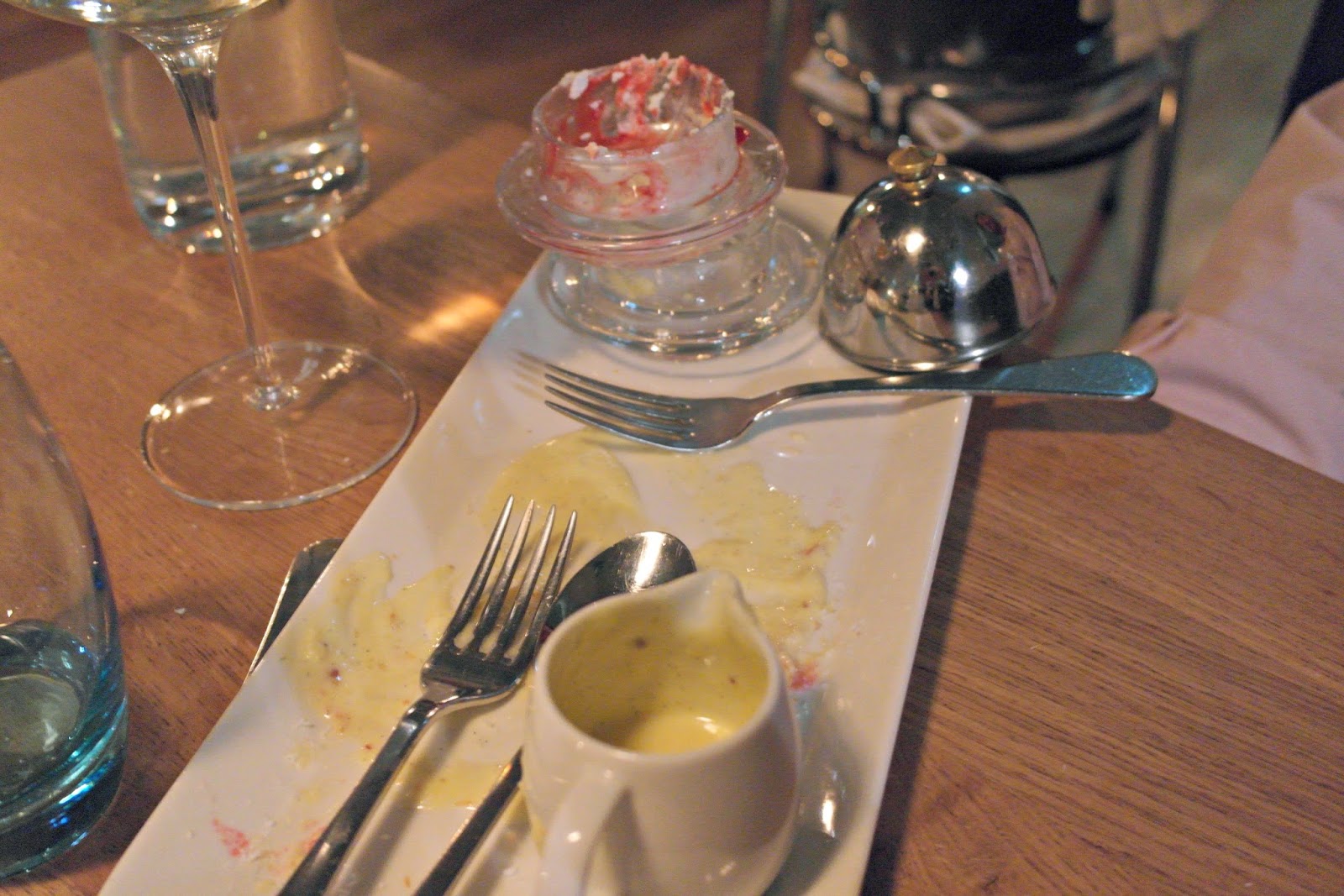 I’d say I was very impressed with the food, particularly the starter and the main.  I enjoy eating fish but I’m rather fussy about how it’s cooked and presented, but this ticked all my boxes.  As previously mentioned Nick was impressed too and made sure the waiter passed on his comments about how beautifully his Veal was cooked.

Scoff & Banter is a brand I really like; it’s interesting without being fussy,
and with the proliferation of ‘foams’ and ‘emulsions’ on every corner it’s nice to see good food done well. I hate to see good ingredients wasted on overly complicated dishes which can’t be replicated consistently when the heat is on. Next stop: Mercer Street and see whether lunch can live up to the exceptionally high standard set by this refreshingly uncluttered chain. There seems to be few places in London to get ‘frocked up’ food in a ‘dressed down’ style, and I think Scoff & Banter have nailed it. Bravo chaps. 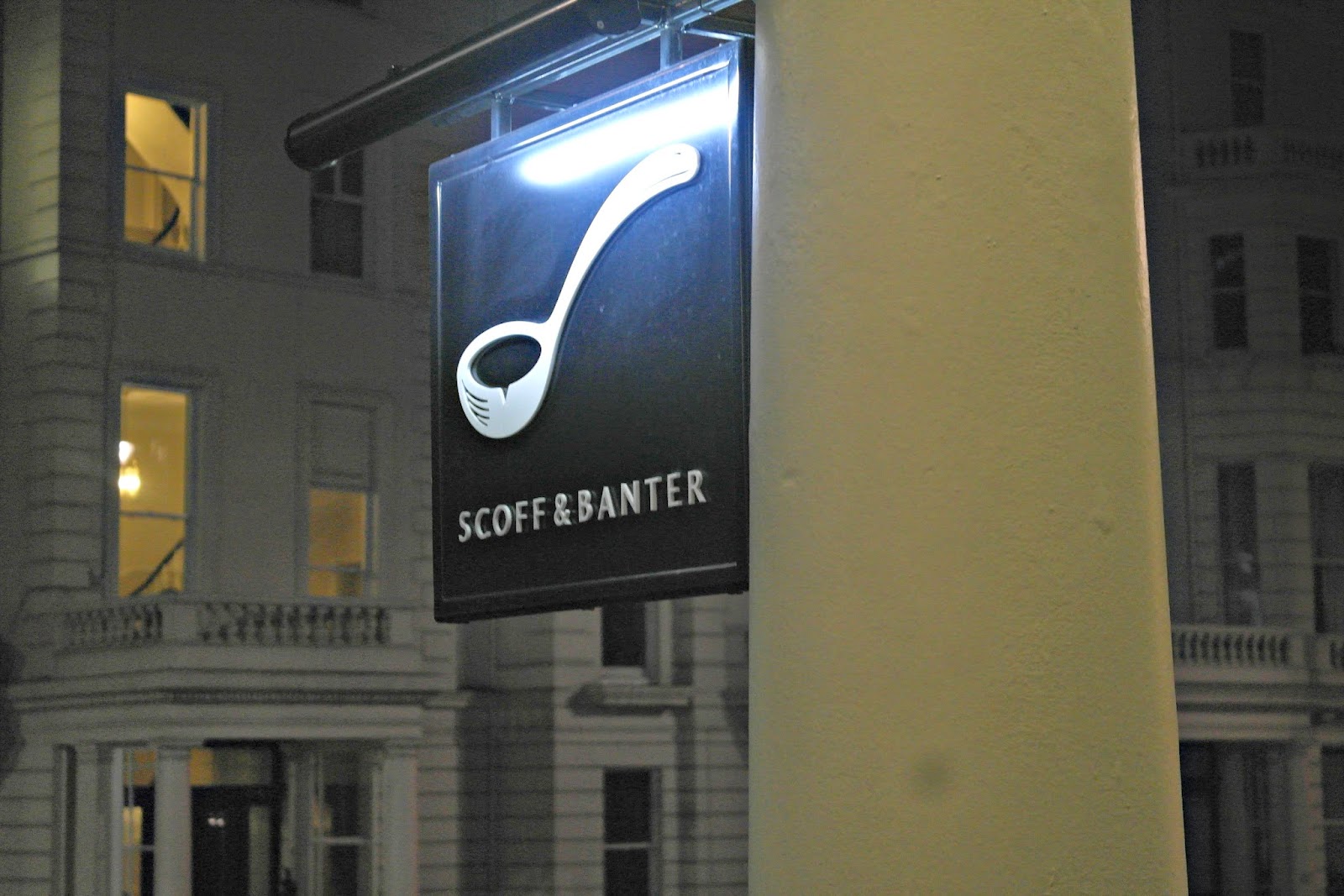