That is quite true, I have indeed just run a marathon, the Berlin marathon in fact. I may not have been quick, I may not have done it with ease, but yes I have the medal, I crossed that finish line and I can finally say I am a marathoner! 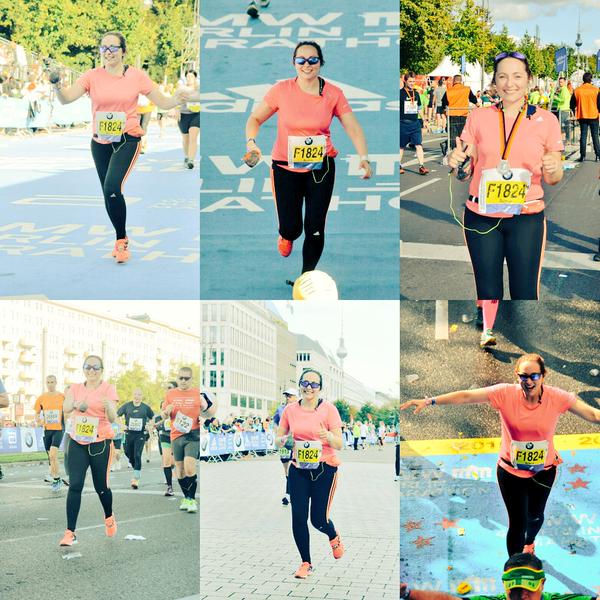 A few of months ago I was approached by Adidas miCoach to test out their Fit Smart fitness tech watch. Loving tech as many of you know I couldn’t wait to see how this device could slot into my varied fitness regime. It covers a broad range of activities so it was great to see how much I was doing and how much I was developing.

A month or so later I was asked by Adidas miCoach if I’d like to run the Berlin marathon. I think I had to read that same email about ten times before it all sunk in, these people had asked me the serious question of whether I would like to run the marathon. Yep, they had the name right, they had the blog right, so it was for certainly for me. Can I run a marathon? Was my next thought. I’d run up to a half marathon before and between us, I hated it. This was a fair few years ago before my blogging and youtubing days, and anything that meant I had to move from behind my computer screen deemed as being too much. A lot has changed since then, I’ve got married, I bought a house, I was diagnosed with epilepsy, I’ve had two knee operations… I’d say that’s a fair amount to deal with! Plus any running I do now is short distance, so endurance and not speeding off is totally out of my comfort zone. 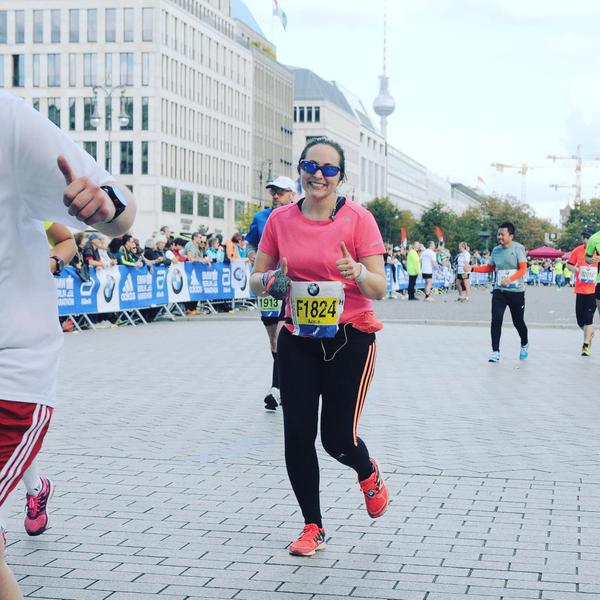 Back to my initial question, can I run a marathon? I asked everyone around me and all of them laughed or looked at me as if to say I was mad to consider it. No, no, I was serious but even though I felt confident, my confidence was slipping because of the negativity I was getting. Only one person could know what I should do and that was my husband, my Ironman (he is actually an Ironman triathlete, it’s not a pet name) he looked at me and simply said, if you want to do it and work hard, you can do it. That was it, yes that sounds great, count me in, Kind Regards Annie. Holy hell, the email was sent, the deed was done and there was no turning back.

Whatever you do fitness challenge wise as much as you plan, life gets in the way and for me it was of course my wedding. I was trying to train but I had table plans coming out my ears and frantic worries about who was doing what on the day, so running was sort of pushed to the back of the pack. I knew I needed to get past the wedding to concentrate. Post wedding and I was on it. A structured plan was in place and I was doing my best to balance short and long distance days, stretch days, swimming days and also relax and do nothing days. I know my body will always go into shock if I don’t mix things up fitness wise,so I continued to do my weight training, my yoga and my swimming because that’s what works for me.

Like all training you have good and bad days, a good day for me was doing a half marathon distance in training and completing it in just over 2 hours. A bad day was an alcohol related injury on my ankle 2 weeks before the race. Oops. As you can imagine I was rather stressed when this happened, as little did I tell you but I’d gone over on the other ankle at the very start from dancing about my living room and tripping over the rug. It is official I am a walking hazard. So in the last week I couldn’t run and instead iced and rested my swollen ankle. I decided to venture to Berlin and see how I got on, what else could I do? 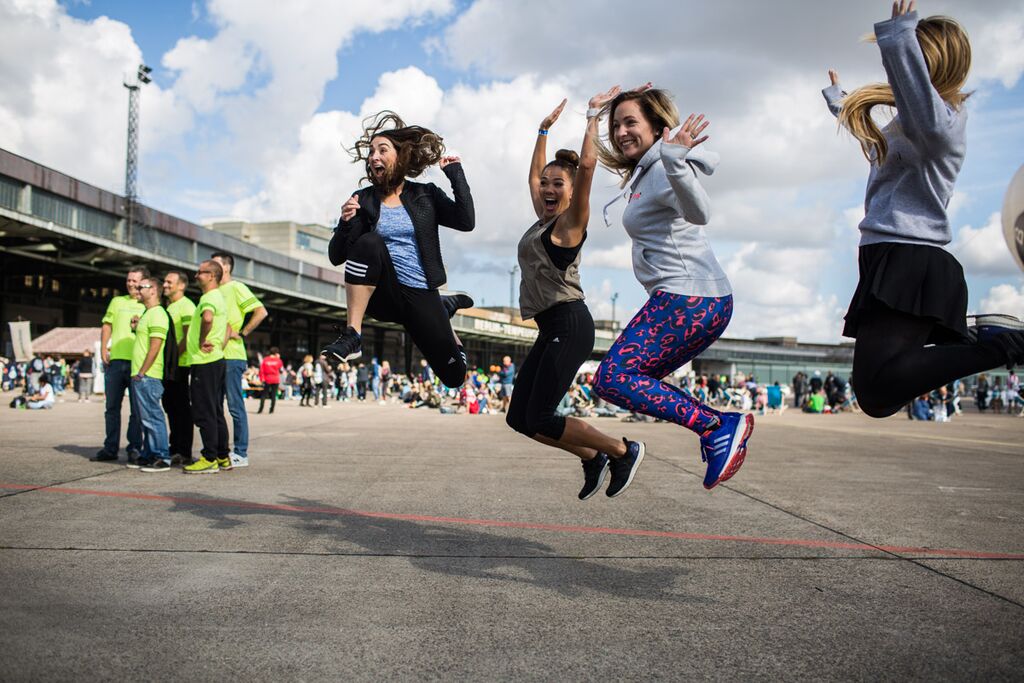 I forgot to mention I was actually doing the marathon with three other amazing bloggers, Susie, Kelly and Sophie. I’d met Susie and Sophie previously for a quick run in London, but Kelly was joining us in Berlin from New York (internet sensation #runselfierepeat). We met, bonded and soon were off on adventures with the Adidas miCoach team in Nuremberg. Firstly we went for an awesome tour around Adidas HQ, which was something you would only dream of. I think if I was left to my own devices I would of quite honestly got lost it was that big! We got to see where they do all their product testing and also the ultra exclusive Athlete Services, which plays host to some of the top sporting stars and also uber hot celebs such as Kanye and Pharrell. Turns out not even some of the members of staff have been into this part of the building. 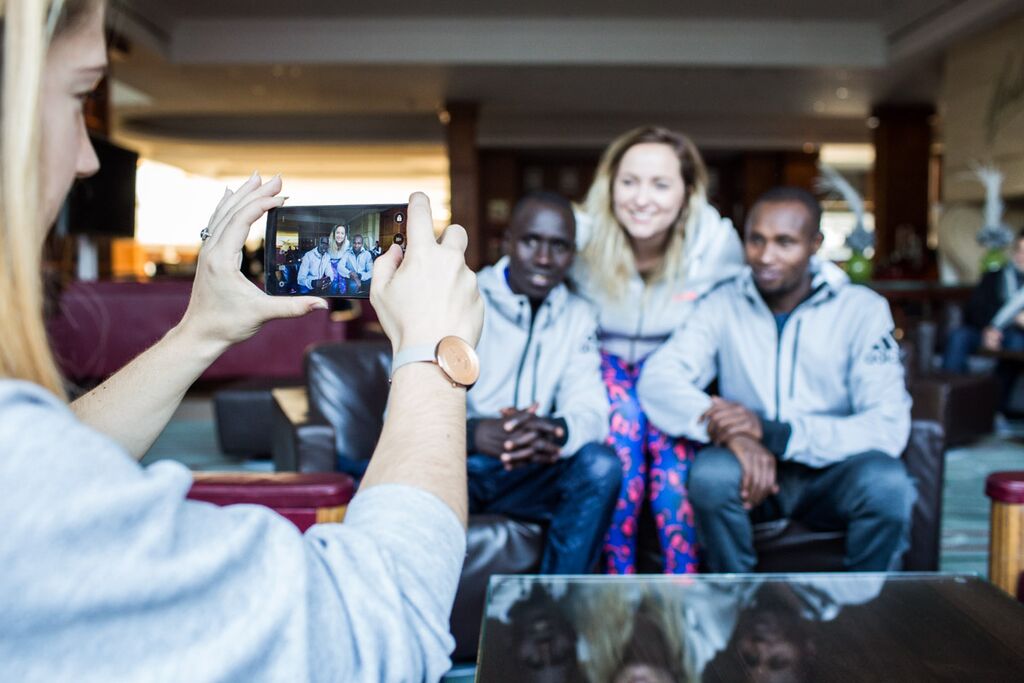 After Adidas HQ tour and shopping trip in the on site store, (FYI it is massive) we took our trip to Berlin via train. By this point any mention of the word marathon and I started to feel a little queasy. I kept telling myself it was fine I had a couple of days before I was due to run… and my goodness did they fly by. Exploring Berlin and sight seeing days zoomed by, meeting marathon legends Geoffrey and Emmanuel Mutai, but before I knew it I’d eaten my last meal of pasta and was laying out my race gear. Reality was sinking in and I felt very nervous. This was the main reason Adidas asked me was because I was the marathon virgin. I was ready to do them proud and show that even though I am no running expert, I could do this. I didn’t tell you but the girls I was running with were all marathon pros so I was starting at a different point to them, no one I knew was with me at the start so I did what I always do and started talking to a random. In this case I befriended a guy who was running for Alzheimer’s Society, we egged each other on as we headed to the start, parted ways as he zoomed off in front of me. It was now all down to me… and ZZ Top Gimme All Your Lovin’.

Now I won’t bore you with the finer details of my race but to summarise, I had to go to the loo 4 times, (I had over hydrated and was nervous so I ended up in lots of bushes along the way) I smiled all the way up to 30k then started pulling unhappy faces, I hit ‘the wall’ at 10k to go, I got cramp in my calf around 34k, I had a partial seizure at 32k, and I had Black Lace Agadoo in my ear as I crossed the finish line. That all being said nothing quite makes you feel invincible like crossing that finish line, or thinking you still have 5k to go when in fact you only have 1k! 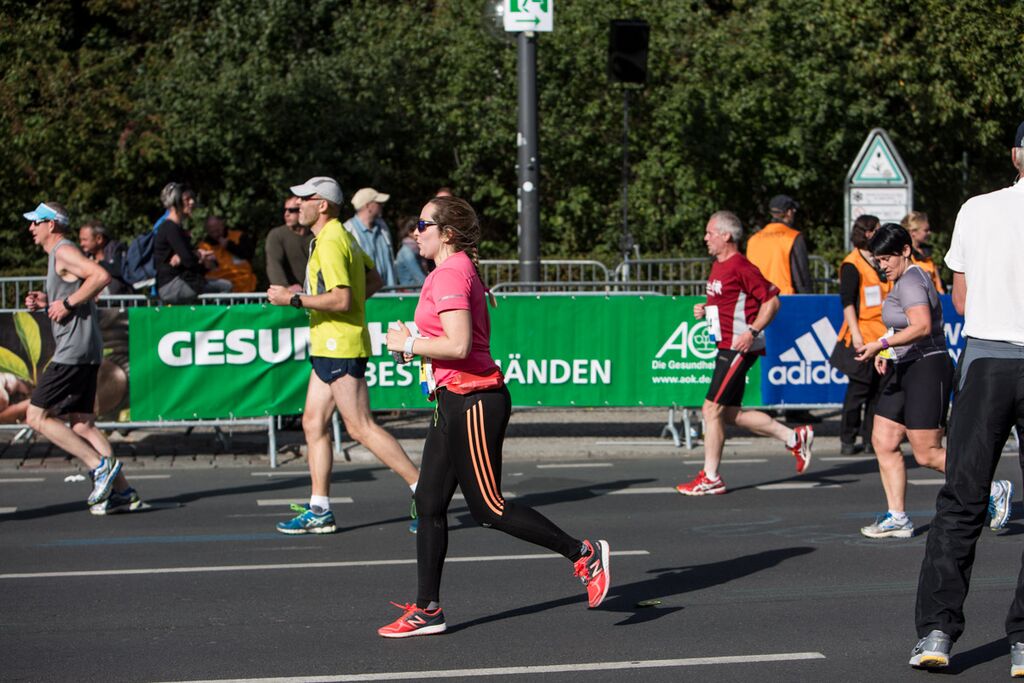 Would I do it again? If you’d of asked me that night I would of scowled at you and told you to do one, but now I’m recovered I would do… it’s like I’ve forgotten how hard it was, either that or I’m a sucker for torture! But joking aside I know what I need to do now and what I would do differently. Regardless of times, two months worth of training and obstacles that got in my way, I, Annie completed my first marathon and made three amazing new friends along the way. Watch out 2016 I’m coming for you!